There are many fantastic figural powder dishes where a fluffy swansdown powder puff once formed a full fuzzy tutu for a lovely half doll as she posed in the powder. Unfortunately, over the decades, often the powder dish, the half doll, and the powder puff itself went separate ways. And while it is possible to find a suitable half doll for a base, finding the proper puff is much harder. Old swansdown puffs are scarce, expensive, and fragile and new down puffs are pricey. Plus these puffs really don't form a secure base for a valuable half doll. I have discovered an inexpensive way to both replicate the original feathery puff and securely display the half doll. 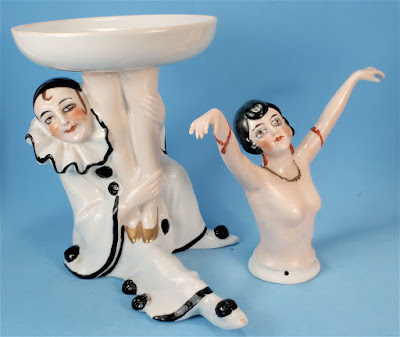 You will need wood glue, white craft glue, and a sharp craft knife. At your local craft store, buy a round wooden wheel, a round wooden dowel that will fit securely into the hole in the wheel's center, and a feather marabou boa in a color that will match your dish. 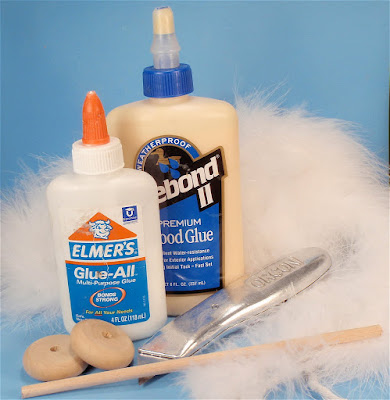 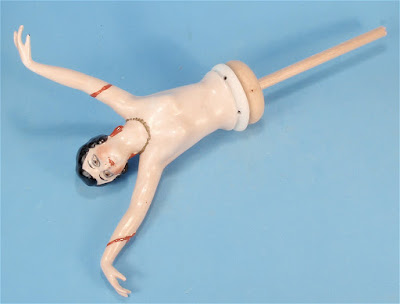 Glue the dowel and base together with the wood glue and let it set. Once the glue has set, spread a layer of craft glue on top of the wheel at the base of the dowel. 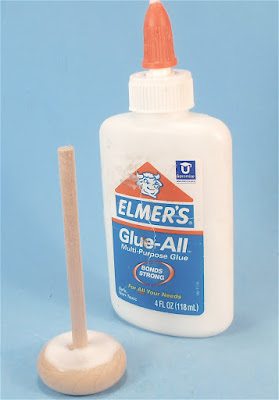 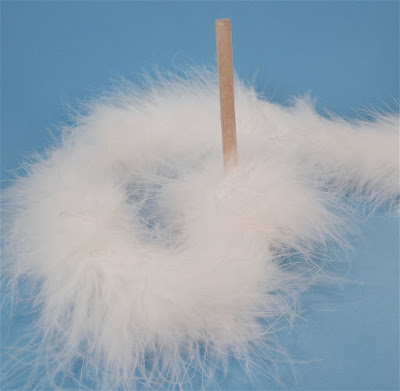 Place the finished feathery base into the dish and slide the half doll over the dowel. For more security, stick a dab of Museum Gel or glass wax under the wooden center of the base. This wonderful Pierotte powder dish is probably by the German firm of Fasold and Stauch. The powder dish is as big as it is beautiful. The base alone is 5.25 inches tall.  The amber-eyed flapper is by Carl Schneider and is 4 inches tall from her base to the top of her black bobbed hair. The only mark on the base is a faint number that appears to read 10287. The half doll is incised on the back of her base with a partically obscured five-digit number that begins 170. 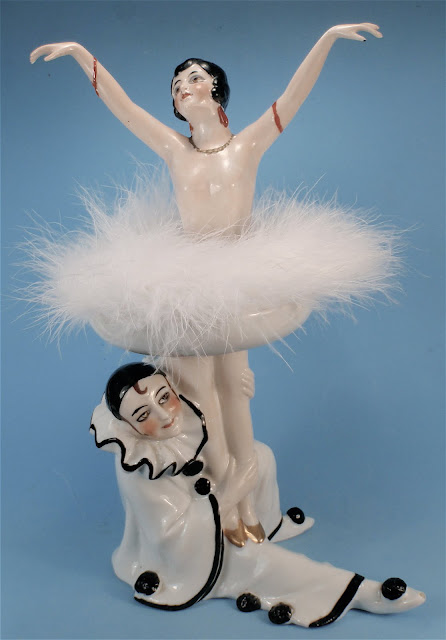 Another example, in this case using black marabou. The 4.5 inch tall base is marked only France and may be from Henri Delcourt. The haughty half doll is 5 inches tall and incised 22489. She may be by the German company of Sitzendorf Porcelain, who used a 22000 series on some of its half dolls. 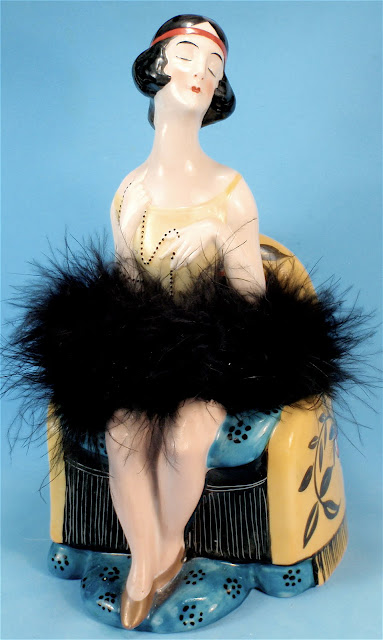 In 1912 in Paris France, two luxury magazines were born, the Journal des Dames et des Modes and the Gazette du Bon Ton. These magazines were aimed at a wealthy, educated, urban, sophisticated, and fashionable clientele. They included stories, travel articles, and poetry, but their focus was on fashion. The magazines were very exclusive and printed in limited quantities. They were brilliantly illustrated by many of the finest Art Deco artists of the period and were not bound, but instead were folders containing original hand-colored prints known as pochoirs. The pochoir print was created by using a series of stencils for applying each different color. Multiple stencils created jewel-like colors and delicate shading. The Journal existed for only two years, but the Gazette was printed, with a break during WWI, from 1912 to 1925.

The elegant illustrations usually featured slim, wealthy, and aristocratic women dressed in the latest luxurious and expensive couture fashions of the day, posed with only the most chic and stylish accessories. Among these fabulous fashion plates there are only a few showing the bathing suits of the period. This early pochoir is by George Barbier, one of the most famous and sought after illustrators of this period. He produced works for both the Journal and Gazette. Entitled Costume de bain, the pochoir is dated 1913 and comes from the short-lived Journal. 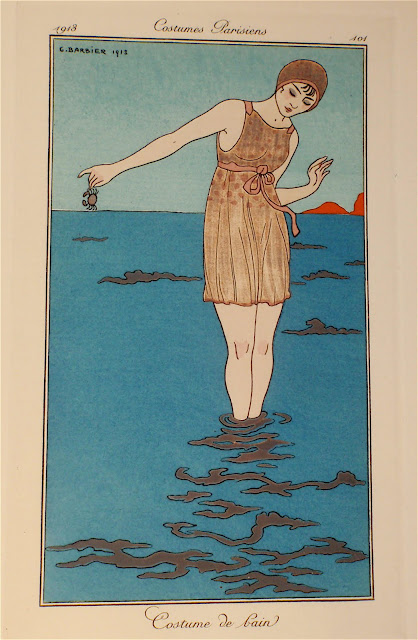 Also from 1913, this pochoir, by Pierre Brissaud, is from the June issue of the Gazette. The title translates as "Let's go! Courage!" 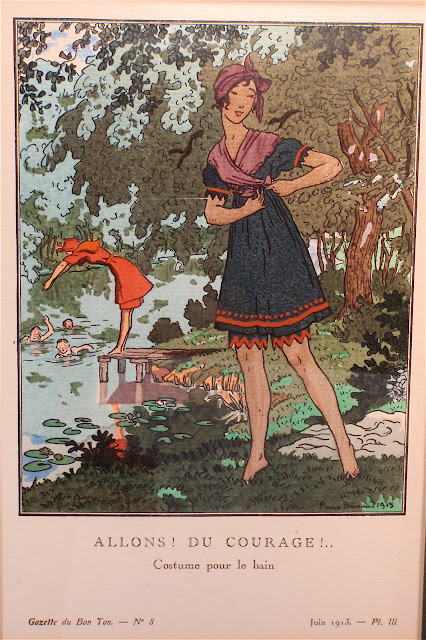 This 1921 pochoir is also from the Gazette. By Martin, this stylized study in black and purple is entitled "The Swimming Lesson." 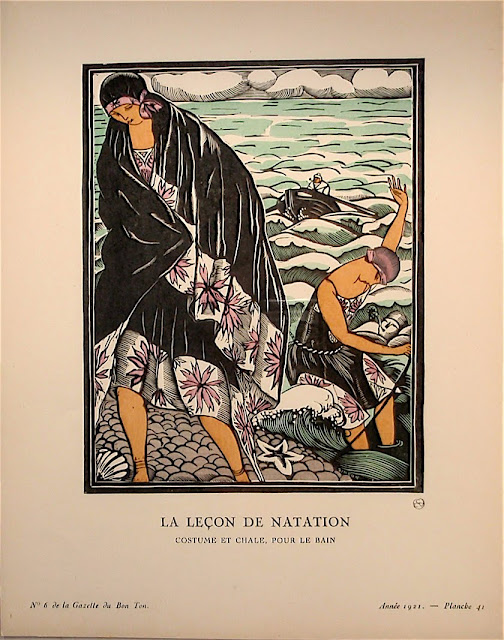 Cancer the Crab is the zodiac sign for those born from June 22nd to July 23rd. So this month's theme provides something to crab about. 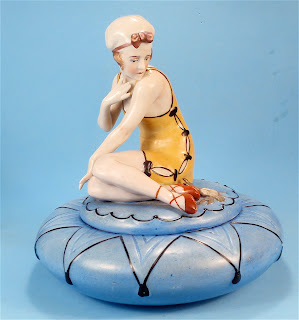 Talk about fresh seafood! This china powder box features an astonished bathing beauty and an overly friendly crustacean. Six inches tall, it is incised underneath with the Sitzendorf crown and “23908.” 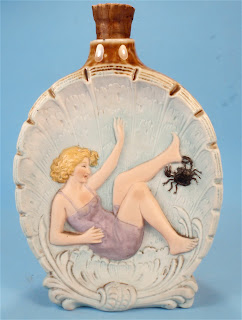 Another sea side sunbather and a sulky shellfish. This is a "nipper," a novelty bottle that once held a "nip" of alcohol. By the German firm of Schafer and Vater, this bisque bottle is incised “3876” on the back of base and is 4.5 inches tall. 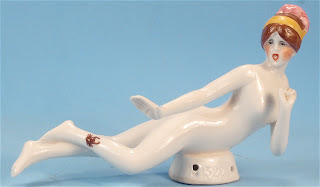 This nude nymph tries to ward off a tiny crab crawling up her lithe leg. Incised “15223” and “Germany," this panicked pincushion is 4 inches long.
0 comments