Three (Not So) Little Pigs

Two of this trio of big piggies with underdressed riders have appeared earlier on this blog, but the rider on the right, holding a champagne flute in her hand, has now joined the previous pair of porkers.  She is 4 inches long and incised underneath with what appears to  be “6819.”

Although all the pig passengers posture in different poses, the pigs all are the same model. In Germany, the pig is a sign of good luck and prosperity.  A person who is lucky will say "Ich habe schwein gehabt" (I have had pig).  It is traditional to give gifts of peppermint or marzipan pigs known as glücksschweinchen (good luck pigs) at Christmas and New Years.  Considering the bisque belles' state of dishabille and provocative poses, this passel of porkers might better be deemed as "get lucky" pigs.  Here an old German New Year postcard features the same theme of a hussy riding high on her hog. 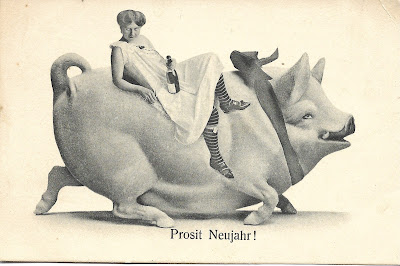 ﻿This well dressed damsel dates from the mid-1850s to the late 1860s, when the fashion for crinoline  or hoop skirts swept far and wide (and I do mean wide!) through the fashion world.  The creation of the crinoline cage allowed wide bell-shaped swinging skirts, some as much as six feet in diameter. 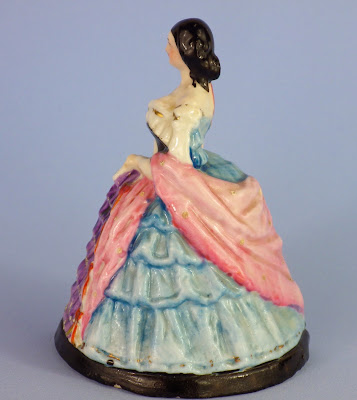 The fashion for hoop skirts was often the target of social satire and even risqué humor.  This china charmer shows a whole other side, displaying a damsel in dishabille buried beneath the wide rings of wire and whalebone and the many yards of fabric and flounces. 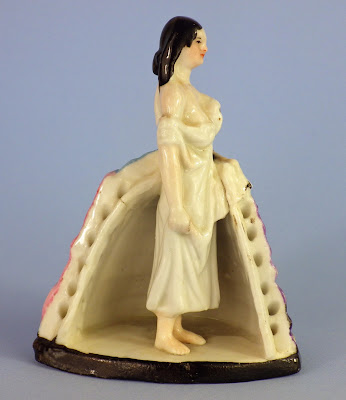 Just 3.25 inches tall, this comic china figurine is known as a fairing, because these small inexpensive porcelain pieces often were given as prizes or sold as souvenirs at fairs from the mid-1800s through the early 1900s. 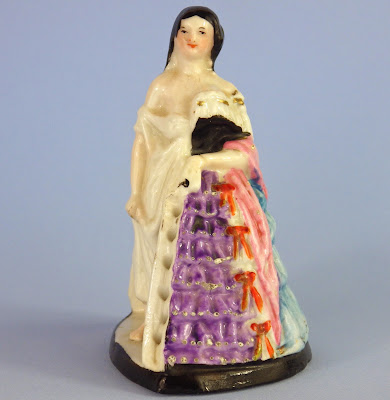 A similar spoof from a 1856 cartoon that appeared in "Punch," a British humor and political satire magazine.

Walter Whitehead, Are You My Daddy?

This antique oil painting on panel of a beautiful windblown bathing belle venturing out among the swelling waves has been featured previously on this blog.  It was clearly painted by a skilled artist and the style made me wonder if it was intended as an illustration for a magazine. 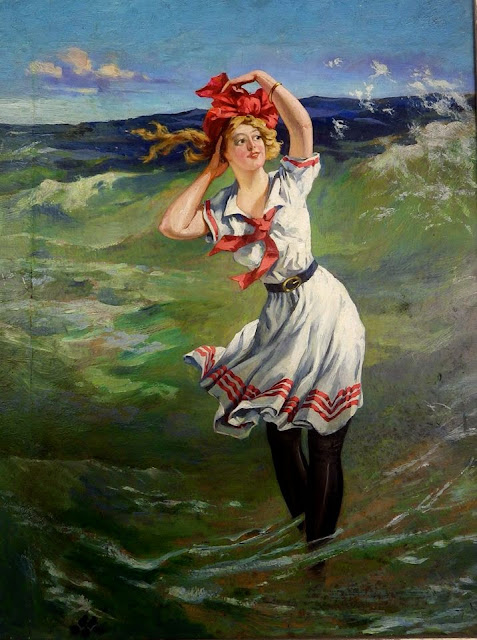 The painting was signed only with an odd monogram looking like a "W" interposed over a paw print or flower petals.  A friend had suggested that the artist might have been Henry Sumner Watson (1868-1933), who also used the name Hy S. Watson, and sometimes used a monogram of a "W" in a circle.  However, although the time period was right and there were some similarities between Watson's works and this one, all of the paintings and sketches I have found by Watson are signed with his name, not his monogram. 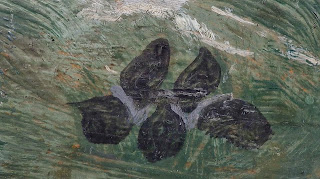 I finally found time to visit the extensive collection at the University of Texas Fine Arts Library, and spent an afternoon researching the reference books on artists' names and signatures.  And I think I have another possible painter for this pretty picture, Walter Whitehead (1874-1936).  Whitehead was an illustrator active during the 1910s, when my picture would have been painted, and he often signed his works with a monogram of a "W" against a dark background.  Below is his "Encore," painted in 1908 as an advertisement for Cream of Wheat.  Note his monogram in the lower right corner.  To me there seems to be a similarity in the skilled impressionist looseness of the brushstrokes, was well as the treatment of the shading of whites and the use of deep strong reds to accent the figure. 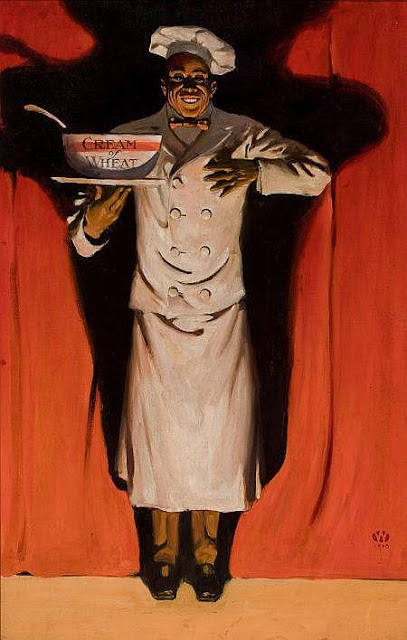 As an illustrator, Whitehead used a variety of styles and his work often appeared in posters, including patriotic works for WWl.  This more peaceful subject, a print from 1915, is signed with his monogram in the lower left corner. 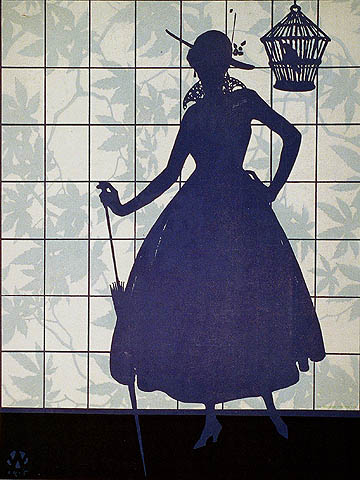 Another print, "Old Miss Hopkins," by Whitehead from 1911 with his monogram in the lower left corner. 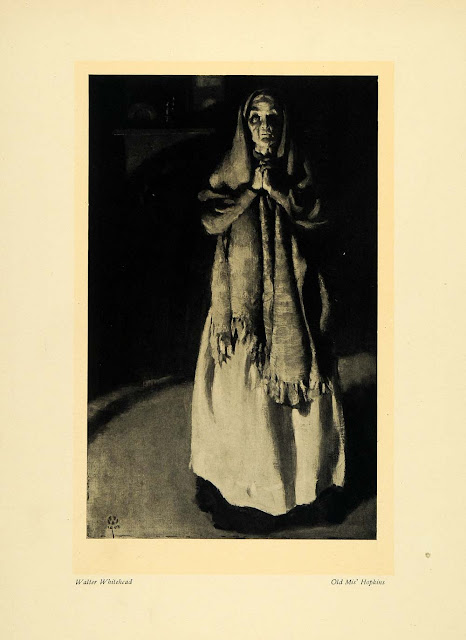 This is all speculation, as there are only a limited number of Whitehead's works pictured on the Internet for comparison,  most of which are his WWI posters.  Also, the monogram on the identified Whitehead works is tighter and more concise than the monogram on my painting and, at least in the three examples I found, always accompanied by a date.  Whitehead was a prolific illustrator, with most of his works appearing in magazines and advertisements.  Whether he is the painter of my bathing beauty could only be definitively answered by a museum curator or an art appraiser familiar with Whitehead's works, but I certainly think he is a possible candidate!
0 comments