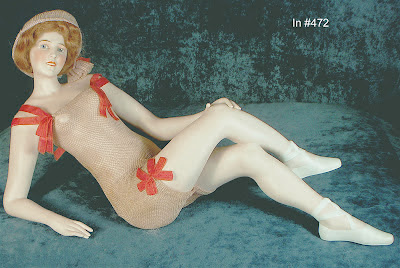 Ms. #472 is one supersized siren, measuring 14.5 inches long and 7 inches high.   She is all original, from her light auburn mohair wig to her net bathing suit trimmed with red ribbons  Her face is beautifully painted and detailed, with  brown feathered brows, finely painted eyelashes,  and parted smiling coral lips revealing molded teeth.  There are no visible marks, but she is by Galluba and Hofmann.  My theory is that these gigantic bisque bathing belles by Galluba were meant as exhibit pieces, perhaps at commercial expositions or store displays,  and were not generally available to the public (it would take one heck of a china cabinet to display this gorgeous giantess!) These extra-large ladies are very hard to find, especially in such pristine condition. 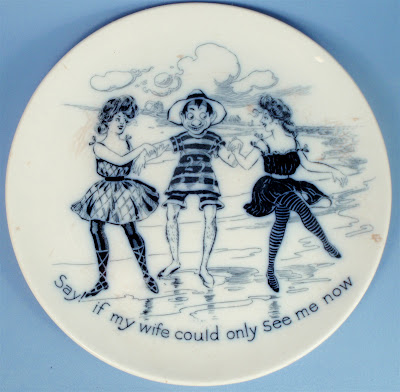 I  have had this rather weird and wacky bathing beauty plate in my collection for many years.  It is part of a series showing funny beach side frolics. 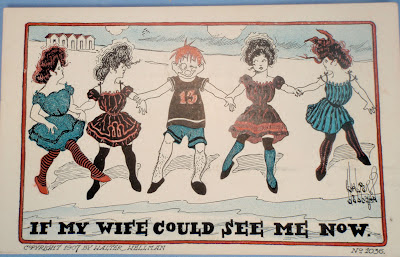 Recently I came across this postcard by American artist Walter Wellman (1879-1949).  In the early 1900s, Wellman, a cartoonist for the Boston Globe, began publishing some of his cartoons as postcards.  Wellman created comic strips and drew illustrations for many of the newspapers and magazines of the day. It is interesting that even though the postcard clearly states that the image is copyrighted by Wellman, the plate does not include any reference to Wellman. 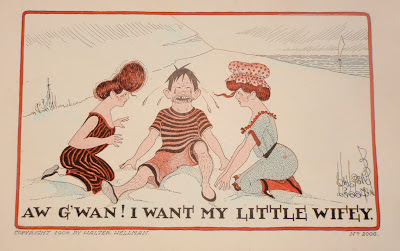 Another Wellman postcard.  His rather weird sense of humor does not appear to have passed the test of time.  Perhaps you had to be there (meaning the early 1900s) to appreciate it. 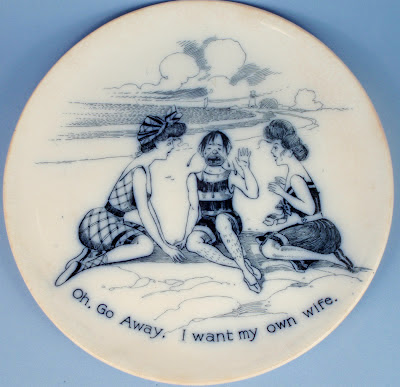 Another plate that was certainly inspired by the Wellman cartoon.  Again, there have been some subtle changes to the cartoon and the caption's American slang has been switched to more proper English. 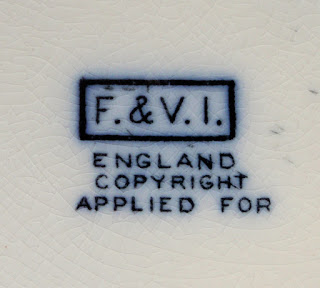 The mark on the back of  each plate.  I have not been able to determine who the maker is, but I think, considering the plates appear to be plagiarising Wellman's postcards, the "Copyright Applied For" is a rather cheeky touch.
0 comments

A coy cutie, Ms. #470 stands 8.5 inches tall.  She has her original mohair wig and her legs are tinted dark gray to resemble stockings.  This lithe lovely certainly belongs on a pedestal!  By Galluba and Hofmann, such standing sirens are scarce.  Not only were they expensive to make and assemble, their slender legs and slim ankles are weak points, and many of her sisters no doubt broke off of their bases over the past century.  There are no marks.
0 comments 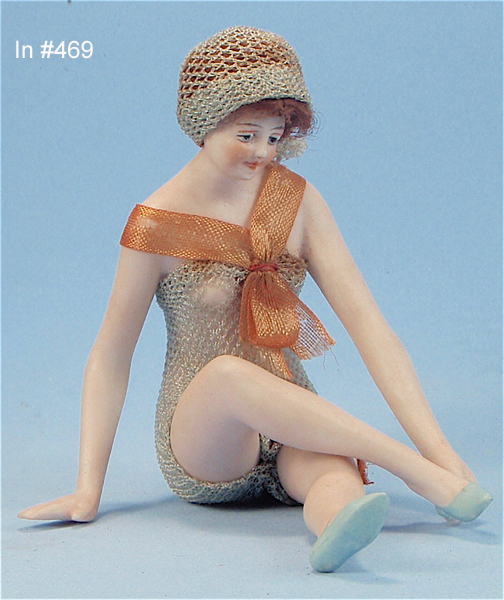 Ms. #469 is another all original ingenue from Galluba and Hofmann.  Of the finest bisque, she is 3.25 inches long and high.  Any marks are hidden under her net bathing suit.
0 comments 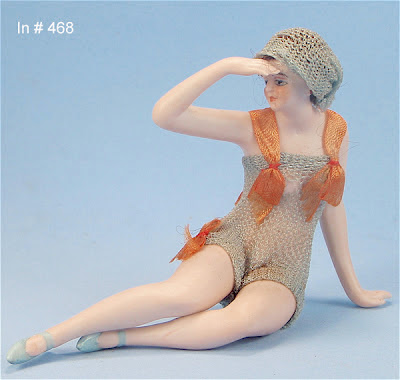 Ms. #468  strikes a pretty pose as she scans the horizon.  By Galluba and Hofmann, this bisque bathing beauty is still clad in her original bathing suit of silk net and ribbon, and her original mohair wig is covered by a matching bathing cap.  She is 4.25 inches long and any marks are hidden under her fragile swimsuit.
0 comments