I am posting a day early this week, and will be taking a brief break, but will return soon. (I hope with some new lovely little ladies and nubile naughties!) 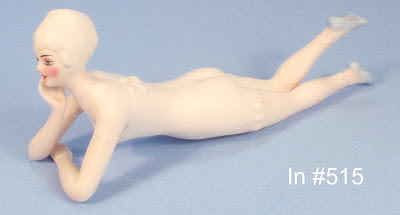 Ms. #515 is a rather mysterious maiden.  At first glance, she looks like she was made by Galluba and Hofmann.  The pose matches one produced by this factory, and she wears the molded ballet type bathing slippers often donned by this company's bathing belles.  Her molded bathing suit perfectly copies in bisque the net and silk ribbon bathing suits originally worn by Galluba's bathers.  However, she is not marked and her rather harsh and heavy facial painting do not look like the delicately decorated features of typical Galluba ladies.  Galluba produced mainly luxury items for export, and after WWI, suffered from the poor post-war economy.  By 1930, its workforce had been cut by almost a third and the company went bankrupt in 1937.  Perhaps this little lass is from Galluba's postwar production.  The molded hair and bathing outfit would have certainly cut down on costs and labor.  These possibly later Galluba gals in their molded suits are actually quite scarce.  Of quality bisque and well modeled and finished, she is 5.25 inches long.
0 comments 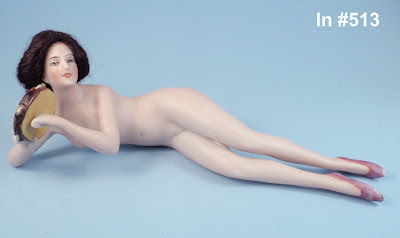 Tapping on her tambourine, Ms. #513 is a sultry sultana from William Goebel's series of harem ladies.  She has lost her original costume of silk and brocade, but with a body like this, she certainly doesn't need clothing to win over her pasha's heart!  I have sort of a soft spot for Goebel's gals.  Although their bisque and modeling is often of the same high quality as those lovely ladies produced by Galluba and Hofmann and A.W. Fr. Kister, their faces lack the ethereal loveliness of Galluba or the striking beauty of Kister.  If Galluba, Kister, and Goebel were sisters, Goebel would be the one described as "but she has a great personality."  That said, this tempting tambourinist does have an especially pretty face.  Any bathing belle doing something other than lounging about and looking lovely is scarce and desirable, and one as big and beautiful as this undulating odalisque even more so.  She is 5.5 inches long and is incised under her replaced mohair wig "1745" and "C."  ﻿
0 comments

As first glance, Ms. #514 appears to be from the German firm of Dressel, Kister and Company.  The pose is one made by the manufacturer, she is of a fine pretinted china of the type often used by this company, and her brown, rather than the more usual blue, eyes are typical of Kister.  Although she is quite nicely done, to my mind, the workmanship is just not up to the high Dressel standards.  Instead of the blue "bishop's cozier" mark (which looks like a spiky backwards question mark) often found Dressel pieces, this little 4 inch long bathing belle is incised underneath "Made in Germany" and what appears to be an underlined "V."  Dressel was renown for its luxury porcelain items, and although it survived WWI, it struggled during the subsequent economic crisis, going bankrupt in the 1930s.  The City of Passau, where the company was located, acquired the factory and kept it functioning on a reduced basis until closing it in the 1950s.  Perhaps this brown-eyed girl is from the post-WWII production period.
0 comments 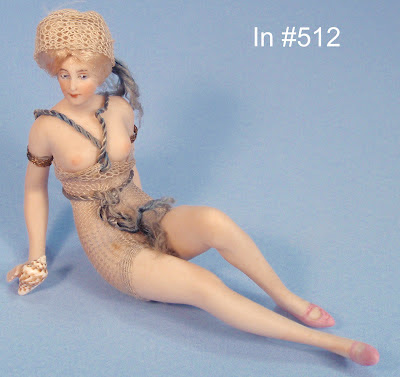 Ms. #512 is by my favorite manufacturer, A.W. Fr. Kister.  Products by this factory are much harder to find than those by its competitor, Galluba and Hofmann, and while both companies' products display the finest bisque and workmanship, I prefer the more realistic modeling of the bisque beauties by Kister.  The fact that this lovely little lady is by Kister, and that she retains her original bathing suit and wig, allowed me to overlook her arms having been snapped off and reglued (the breaks now hidden under armlets of antique gold braid) and her right hand missing its thumb (now disguised by the tiny seashell in her hand).  She displays a number of attributes that allow me to attribute her to Kister.   Her square face with its strong jaw is unlike the perfect ovals found on Galluba ladies.  Not only are her anatomical proportions much more realistic than those found on Galluba's ladies, her full breasts have molded and tinted nipples, a detail generally found only on Kister's delightful damsels.  She is 3.5 inches long and 2.5 inches high,  and there are no visible marks.
0 comments