This 1951 Christmas card opens to reveal not your typical holiday theme of snowmen and decorated evergreens. . . 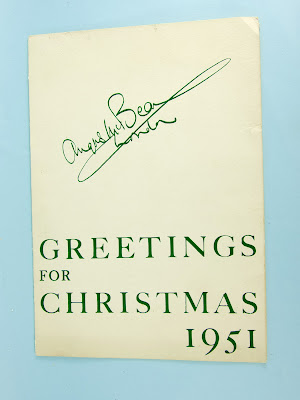 . . . but a scene of a bearded man in a striped old-fashioned bathing suit photographing three Galluba and Hofmann bathing beauties posing on a rocky shore. 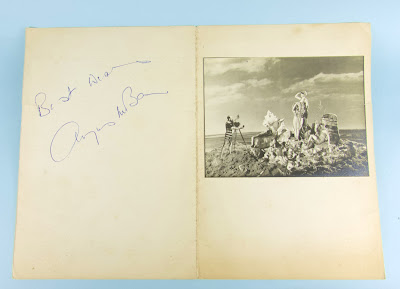 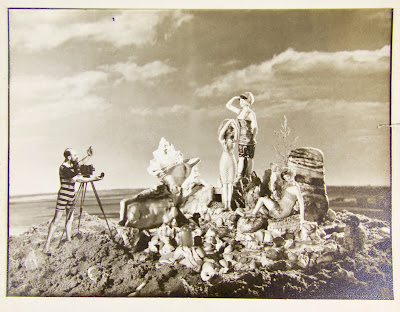 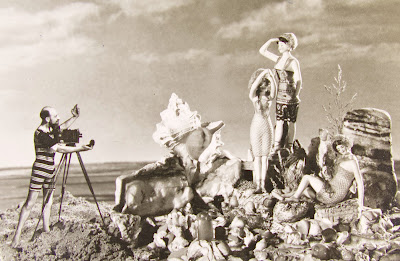 The card is by famed British photographer Angus McBean. Beginning in 1936, almost every year McBean created his own clever holiday cards, using both his skills both as a photographer and theatrical designer to create surrealistic black and white scenes. 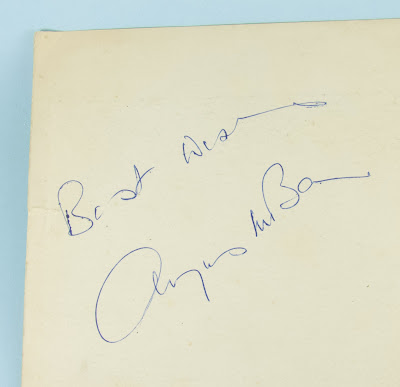 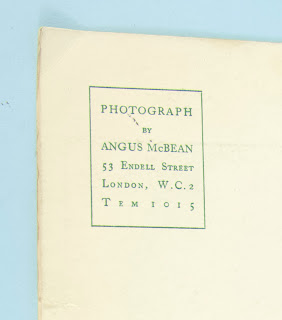 Born in South Wales in 1904, McBean grew up fascinated by film and theatre, purchasing his first camera at the age of 15.  He began his theatrical career in 1932, building scenery and props. In 1936, McBean took the production photographs for Ivor Novello’s play, “The Happy Hypocrite.” The photographs caught the eye of society photographer Hugh Cecil, who took McBean on as an assistant.  Eighteen months later, McBean opened his own studio in London. His portraits included many of the talented and famous, from the great stars of the British theater to Agatha Christie, Laurence Olivier, and the Beatles.  McBean died in 1990, on the night of his 86th birthday.
Another of McBean's works has appeared on this blog, in this 1983 advertisement for Nina Ricci. 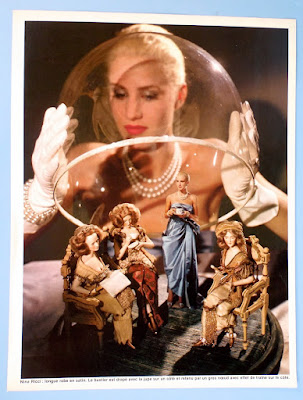 However, the inspiration for the ad appears to be the black and white photomontage that appeared in McBean's 1982 Christmas card, which featured a mini-McBean sharing tea with the ladies as a larger McBean lifted the glass dome. The same seated trio of lovely ladies also starred in his 1956 card, which featured McBean, as a dapper Edwardian dandy, joining them for tea on the deck of the S.S Angus.
McBean apparently had quite a collection, as in his 1983 Christmas card, he appears reading a book (perhaps a bedtime story?) to an entire harem of nubile nudes and lace-clad bathing belles.

Any collector would be a winner with this shell-decorated box topped by two nubile bisque nudes. Although it has become common to refer to any antique shell-adorned box as a "sailor's valentine," the term should properly apply to the intricate and colorful shell creations housed in hinged boxes and produced in Barbados to sell to sailors during the 1800s. However, during the Victorian period it was fashionable for ladies of leisure to engage in shell craft, adorning boxes and other items with tiny shells painstakingly dipped in wax or glue and arranged in elaborate designs. The hobby was so popular that it was possible to purchase patterns and packets of presorted shells. An offshoot of the craze for shell-bedecked knick-knacks was a cottage industry in creating shell-encrusted souvenirs to be peddled at popular tourist resorts along the coasts of England and France. Wood boxes covered in paper, often in whimsical shapes, were decorated with sea shells, typically locally collected. While the sea shells were not as colorful and the patterns not as intricate as those produced in Barbados or Victorian parlors, the boxes were unusual and inexpensive souvenirs of a sea-side sojourn. Often a bisque figurine, a chromolithographed scrap, or other item was included to add color and interest. The two bare bisque bathing belles on this box certainly add both! 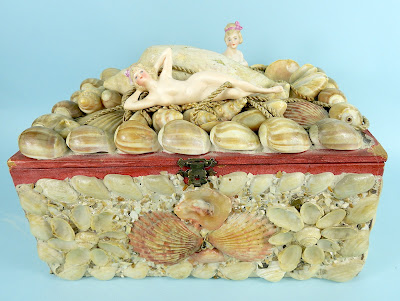 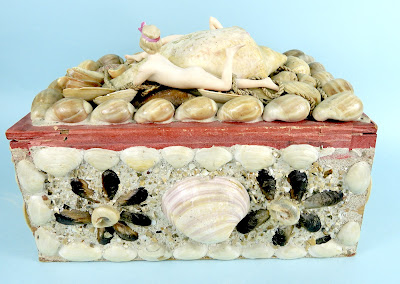 Both beauties are each around 4 inches long. It is not possible without detaching them to look for marks, but they appear to be part of a series by William Goebel of lovely ladies clad only in a ribbon tied around their high-piled tresses. 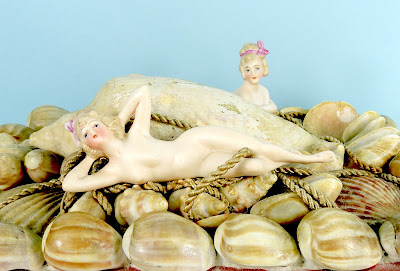 The box itself is about 8.25 inches long and 4 inches high, not including the sizable shells covering the lid. It is made of thin wood covered in red paper. The interior is lined in faded red fabric and features a mirror edged in red cord. 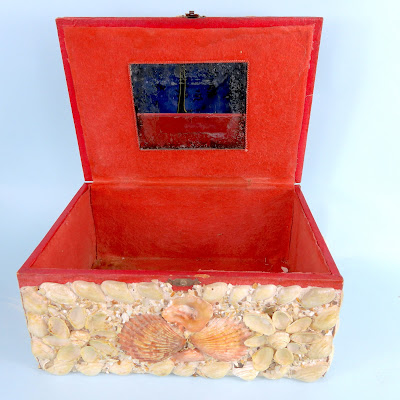 Not So Lucky Cat?

A new post on my maneki-neko page features this rare nodding banko ware cat and discusses why this cute kitty may represent a malevolent supernatural entity. 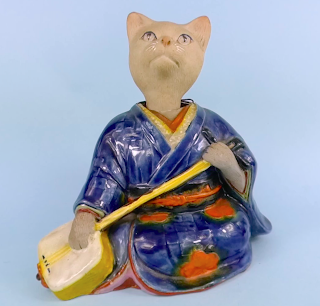