Dainty Damsel by Galluba and Hofmann

This lissome lass in her molded undergarments is a bisque fashion figure by Galluba and Hofmann,  She retains her original mohair wig, but has lost her outer garments of real silk and lace to the many passing years.  Her previous owner made her the necklace out of antique beads so tiny, they had to be strung on a human hair.  Just 5.75 inches tall, this lovely little lady is marked "406."  This rather shy and demure pose, with her hands folded behind her back, is very unusual for Galluba, whose ladies typically gesture gracefully with outstretched arms. 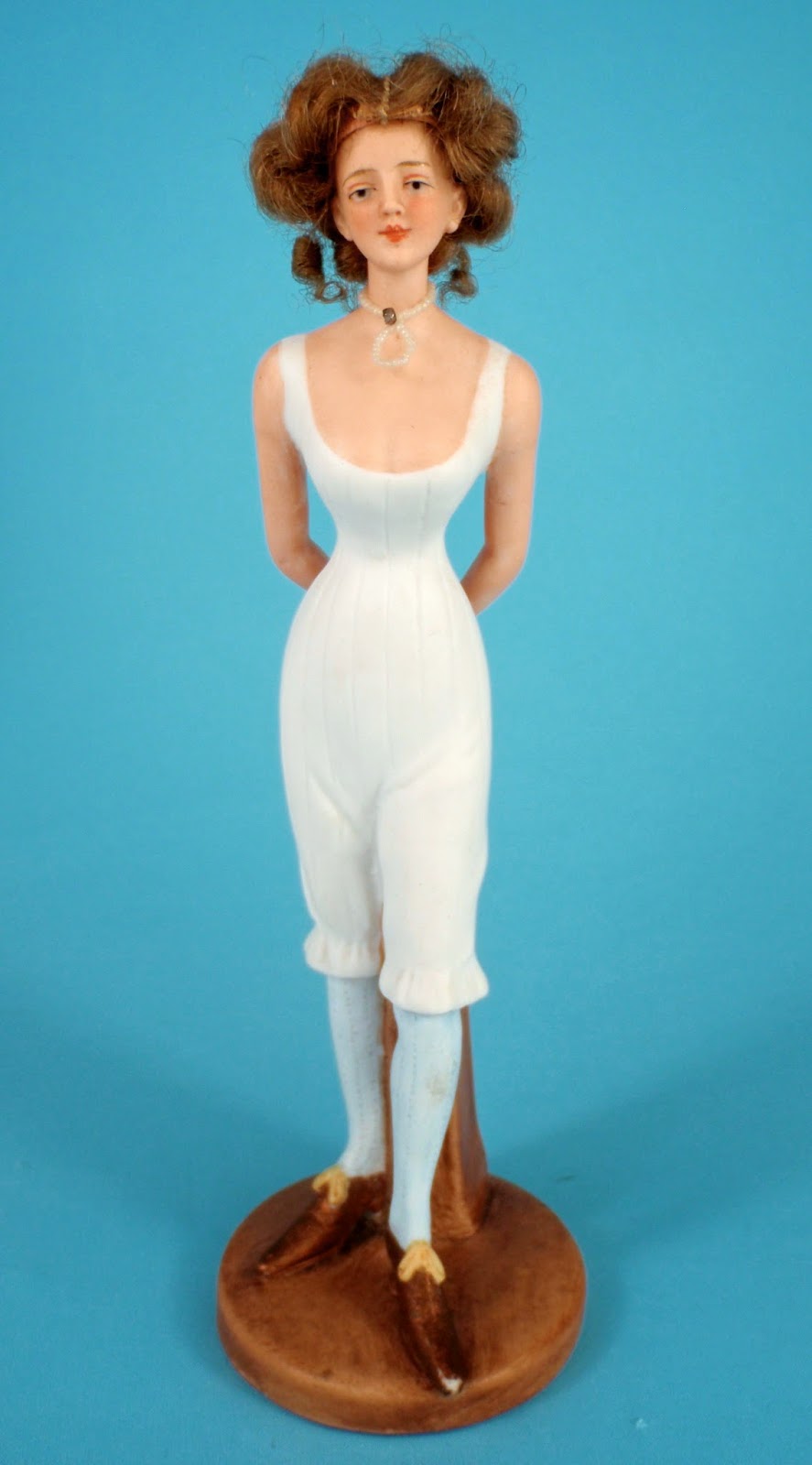 My newest article, entitled "Galluba and Hofmann; Always in Fashion," appears in the July 2014 edition of "Antique Doll Collector." The article concerns 1983 Nina Ricci advertisement featuring three seated elegant Edwardian ladies by Galluba and Hoffman, the fashion figurines by Galluba, and the famed British photographer, Angus McBean, who used them in advertising and his custom-made Christmas cards.

This bathing belle with a book is by my favorite manufacturer, A. W. Fr. Kister.  Although she has been nicely redressed in vintage material, her molded and tinted nipples are visible through her net bathing suit, an anatomical detail typical of Kister.  The molded one-strap bathing shoes with low heels are also a style of footwear favored by this company.  Of excellent pale bisque, she is 5 inches long. 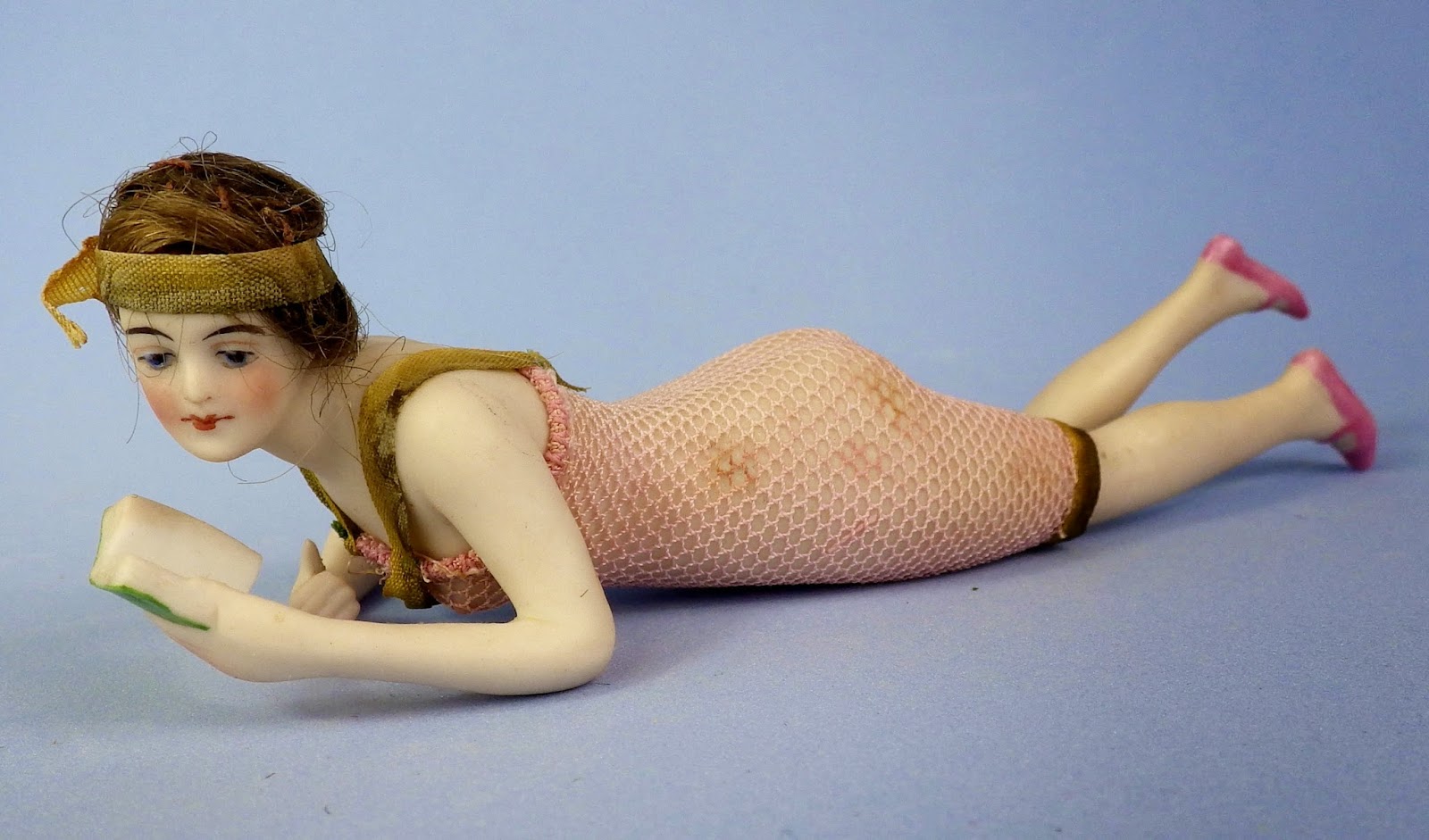 Sometimes Discretion is Not the Better Part of Valor

Earlier in this blog I noted that Dollmasters, a spin-off of Theriault's Auctions, which specialized in artist and reproduction dolls, old store stock, and reproduction doll clothes, had become Florence and George and was offering a variety of figurines made by the Belgium company, Mundial (aka Keralouve), whose copies of antique bathing beauties, half dolls, and all-bisque dolls have flooded antiques and flea markets and on-line auction and sales venues, where they are often misrepresented as old.  The catalogue is now on-line and is offering 16 "porcelain fancies" created by Mundial.  The catalogue describes these items as "Cast from the original designs, you'll find it hard to distinguish from the rare and sought originals - except that ours are stamped "f&g" on the underside."  Great, I thought, unlike the rest of Mundial products, at least these will be marked to indicate that they are reproductions.  Then I read the actual description for each piece, which includes the following:
"Since Florence & George is committed to collectors and the integrity of the secondary market and this piece is an especially accurate reproduction, we have discreetly marked it with a nearly invisible ink which is only revealed under a black light."
I think I still have indentations on my chin from my dropped jaw slamming into the keyboard after reading that.  How is marking each piece with "nearly invisible ink. . . only revealed under a black light" protecting collectors and the "integrity of the secondary market?"  I may be dating myself here, but I haven't had a black light since I tossed out all my fluorescent posters after graduating from high school.  I know a few antiques dealers and appraisers who travel around with a portable black light, but the vast majority of the doll and bathing beauty collectors I know don't bother.  Most of us are attuned enough to pick up overpainting and repairs without the use of a black light.  A folding 30x loupe is often as useful as a black light and doesn't need batteries.  And contrary to common lore, not all modern paints and glues will necessarily glow under a black light.  A black light can be a useful tool, but most collectors do just fine without one.  When I have seen collectors and dealers using a black light, they focus on the areas most likely to be repaired, such as fingers or projecting limbs.  I have never seen anyone using a portable black light to look for hidden marks under a figurine.  And if the ink is "nearly invisible," how is anyone going to even know to check it out with a black light?
On the other hand, I guess the bit of good news is that even if these items aren't marked as clearly as I would like (they don't need "REPRO" in big black letters across the forehead, but a clearly visible underglaze mark in dark paint, or even better, an incised mark, would have been far more preferable), just the fact they are appearing in the George and Florence catalogue may serve to educate more collectors that these reproductions are on the market.  I have nothing against reproductions, and these are pretty attractive and reasonably priced, all I ask is that they be clearly and indelibly marked as such!
Because links and catalogue stock are constantly changing,  here some of the reproductions currently on offer.  As always, it would be a good idea to check the catalogue regularly to see whether any new items have been added: 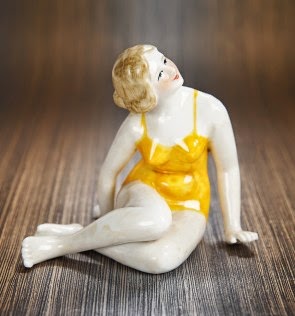 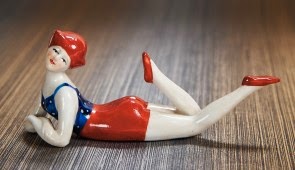 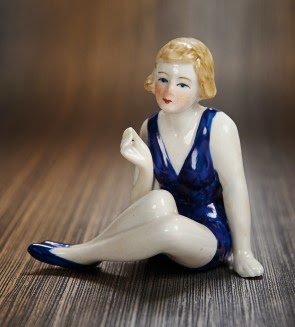 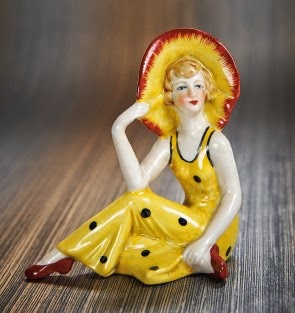 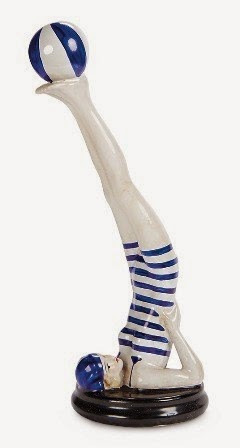 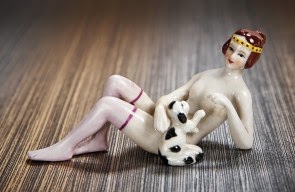 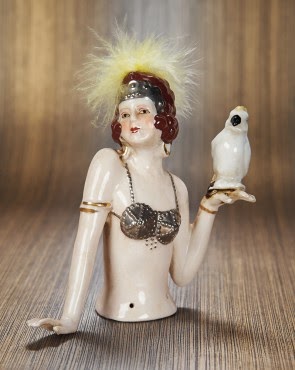 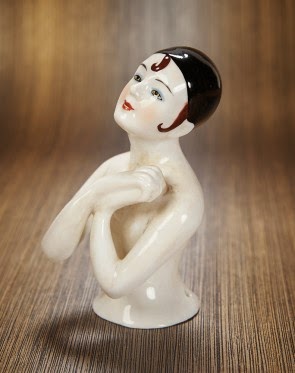 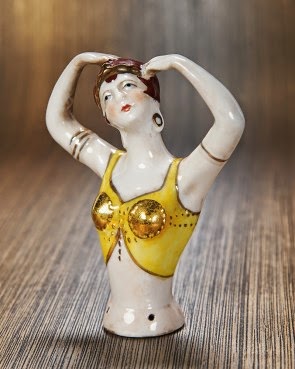 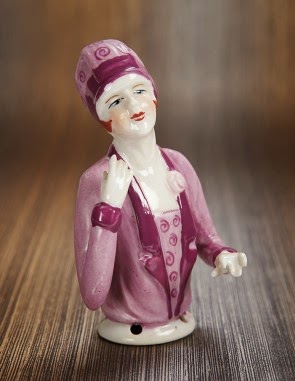 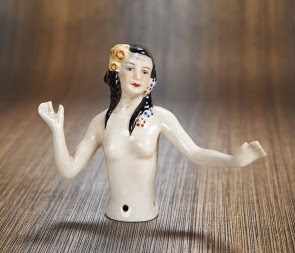 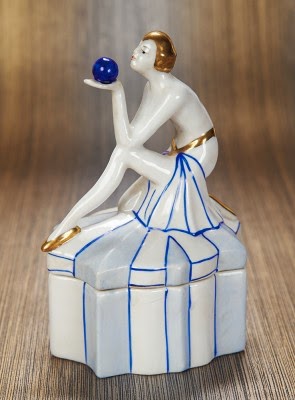 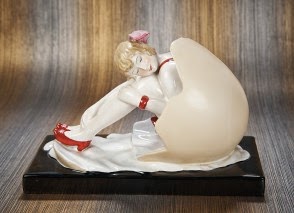 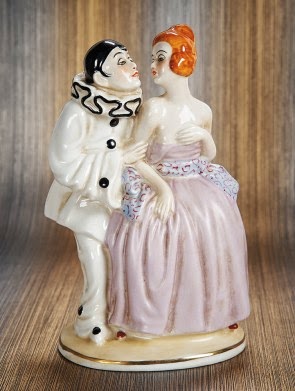