This shapely sow spreads her swirling skirt, forming a small shallow dish for holding pins or trinkets. Her sly smile suggests that she has a secret. 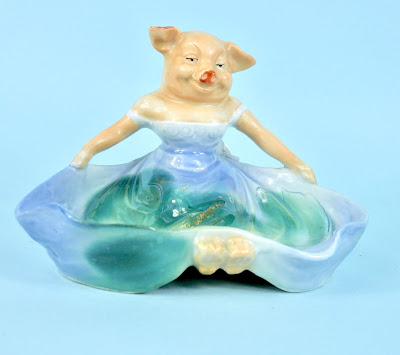 Turn her over and she reveals two plump pink hams on the hoof. Of colorful glazed china, Ms. Piggie is three inches high and 4.5 inches wide.  The piece is incised "3812" on left edge of the skirt and marked "Germany" in black cursive on the back edge.  It is a rare raunchy example of the once popular pink pig fairings. Fairings were small inexpensive porcelain pieces, often featuring comical or satirical themes, typically given as prizes at fairs or sold as souvenirs from the mid-1800s through the early 1900s. Fairings were made in Germany by a number of companies. In Germany, the pig is a sign of good luck and prosperity. A person who is lucky will say "Ich habe schwein gehabt" (I have had pig). Postcards and other empherma of the period featured glücksschweinchen (good luck pigs), often carrying a four leaf clover or leaping through a horseshoe. There is an entire genre of bisque and china fairings featuring pink pigs engaged in a wide variety of human activities. 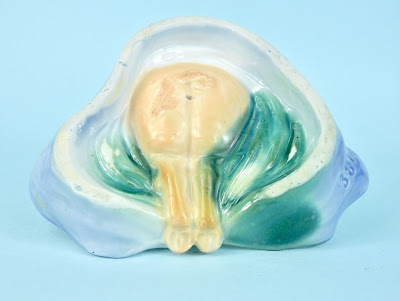 This glamorous gilt has the caption "Newport, RI" in faded gold cursive letters adorning the center of her skirt. Newport since the 1840s has been a resort for the wealthy and in 1875 was described as "the fashionable queen of all American watering resorts, for summer pleasure." It was not only the privileged who flocked to Newport to enjoy its beaches and mild summers, as it also became a destination for the middle and working class. This saucy sow was no doubt purchased as a souvenir of a summer excursion to the popular resort town. 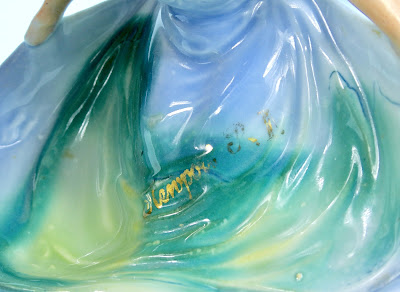 At first glance these pretty pin dishes seem nearly identical. Each is of excellent sharp bisque and portrays a beautiful bathing belle in a green bathing suit and matching bonnet rising from the waves. The lovely ladies are superbly sculpted, from their ruffled bonnets to their slim arms with graceful hands to the gently lapping whitecaps. However, turn them over and you discover that they are not quite identical twins. . . 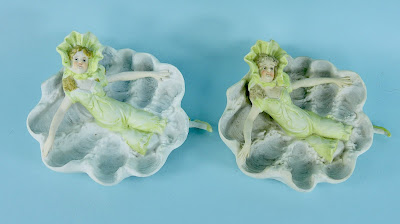 On one, the waters have parted to expose the bather's bare bottom, while on the other the ocean discretely keeps its secrets. Both dishes are about 4.75 inches wide; the modest maiden is incised "6352" underneath while the more daring damsel carries only an incised "5."

A close up of the risqué sister. By tweaking an existing mold a manufacturer could appeal to different clientele without having to create an entirely new model. 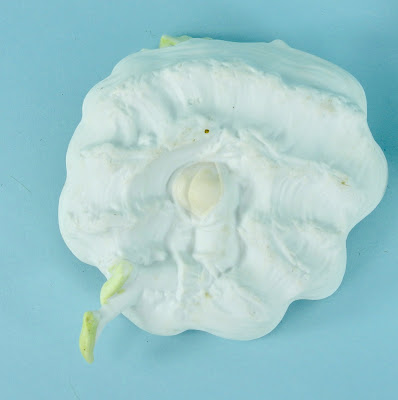