Cock of the Walk

This blog has previously pictured naughty novelties playing on the double entendre regarding the affectionate name for a kitty cat and a vulgar term for a woman's genitalia.  But German companies also engaged in such prurient wordplay regarding another term for a rooster and a man's private parts.  And as far as the German manufacturers were concerned, size did matter!  Schafer and Vater produced a series of buxom blondes clad only in their white chemises and black stockings engaged in provocative play with plus-sized poultry.  However, this bisque belle and her feathered friend show that Schafer was not the only company to portray a damsel in dishabille with a cheeky Chantecler.  From an unknown company, this figurine is 4.5 inches long and incised "3803." 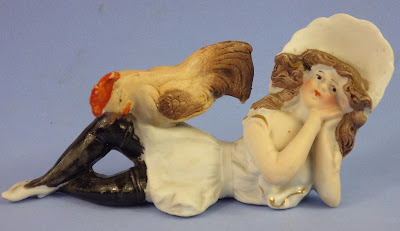 ﻿
This woman of mystery came from Spain.  At first glance, she might appear to be a fashion lady by Galluba and Hofmann, but instead of being of bisque, she is modeled from plaster and stands on a wooden base.  Nearly a foot tall, she is unmarked.

She came bald, but I made her a new mohair wig.  She was jointed at the shoulders with wire, which I switched out for elastic.﻿

A close up of her face.  Considering her age and the fragility of her material, she is in remarkably good condition.﻿
﻿ 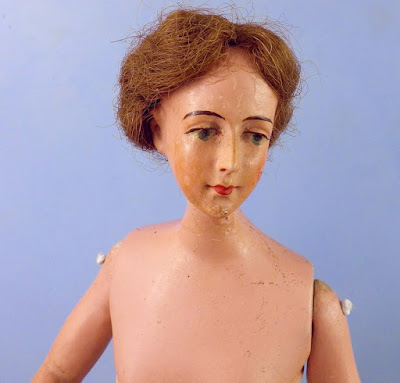 Her lower legs may have once been covered by fabric, as there are bits of material still stuck to her painted stockings. 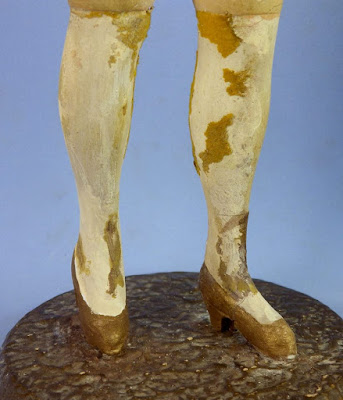 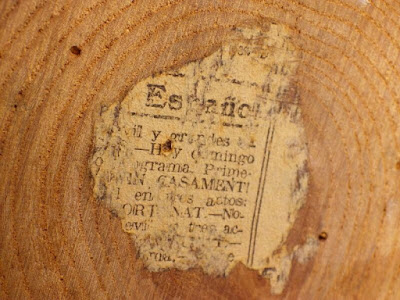 Whoever created her was certainly inspired by the fashion ladies by Galluba, as demonstrated by this pair of the company's bisque belles.  The plaster mannequin has the same perfect oval face, long slender neck, oddly broad shoulders, and gracefully gesturing slim arms.  The right or left foot slightly forward is common to Galluba's fashion ladies, and her strapless undergarment, stockings, and heeled pumps also seem to have been copied from a Galluba gal.  For centuries, Spanish craftsmen have created religious figures and icons out of wood and plaster and I wonder if some artisan in the early 1900s, upon seeing a costly and fragile fashion lady by Galluba, decided to expand his current line of santos to include more modern mannequins for shop windows and counter displays. The pretty plaster senorita's jointed arms would have made her easier to dress and pose.       ﻿ 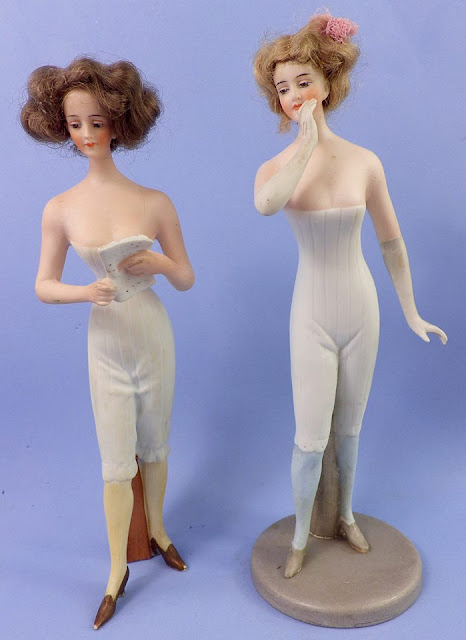