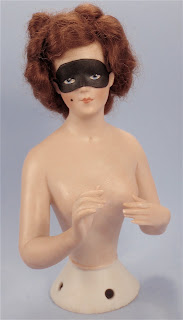 Actually there is no mystery who made this masked mademoiselle, because on the back of her base is the crowned intertwined "G" and "W" of William Goebel. Five inches tall and of excellent bisque, this exquisite half doll is part of a scarce and highly sought after series of delicious damsels in black domino masks. The mask is actually molded, not merely painted on, and her blue eyes have black pupils with white highlights. A beauty patch on her cheek calls attention to her full coral lips. 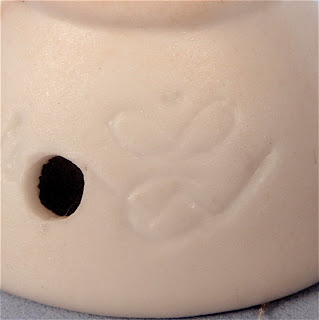 This is a close up of the Goebel mark, which came into use around 1900. 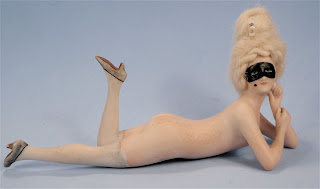 Here is the same masked marvel in full figure. Unmarked, she is 5.5 inches long. Her gray pumps with the darker trim are typical of Goebel, and her legs are tinted gray to represent sheer silk stockings. The wig is a replacement. 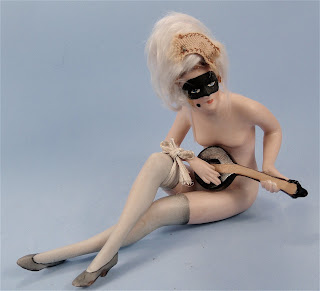 Strumming her mandolin, this masked miss is one of the most sought after Goebel ladies. She even has her original wig of white floss. Frankly, wigs were Goebel's weak point. Often, as in this beautiful belle, they were little more than a hank of mohair or floss wrapped around the figure's bald pate and held in place with tiny pins. Because they were not sewn to a supporting wig cap, the fragile wigs tend to unravel and fall apart. As large as she is lovely, she is 5 inches long and 4 inches high. Underneath she is incised "3739" and "B," and is also stamped "Germany" in black. 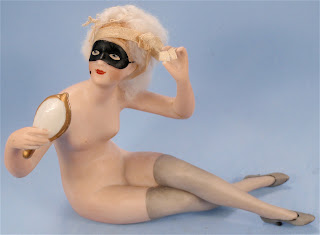 Another desirable damsel, admiring herself in her mirror. She has the remains of her original floss wig and is 4.5 inches long and 3.75 inches high. Except for a freehand black "E" painted underneath, she is unmarked.

This poor little lady suffered a fall sometime in the past, but she is still lovely and her scarcity makes her well worth some restoration. Despite her tumble, she has retained the remains of her original floss wig. Stamped "Germany" underneath in black, she is 5.5 inches long.

It Takes Two to Tango

A fellow collector alerted me to this image, appearing on the youtube video, Masculine Women, Feminine Men (it appears at 1.27). The reason? 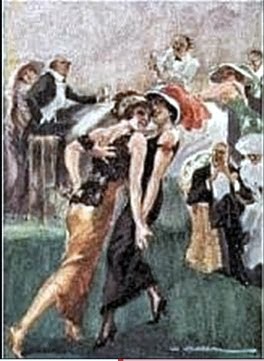 This toothsome twosome by Galluba and Hofmann.  These delectable dancers are 8 inches tall and incised "9039" underneath. There is no doubt this china figurine was inspired by the postcard image.   But where did the image come from? Although signed, the image from the video was too blurred to make out the signature. 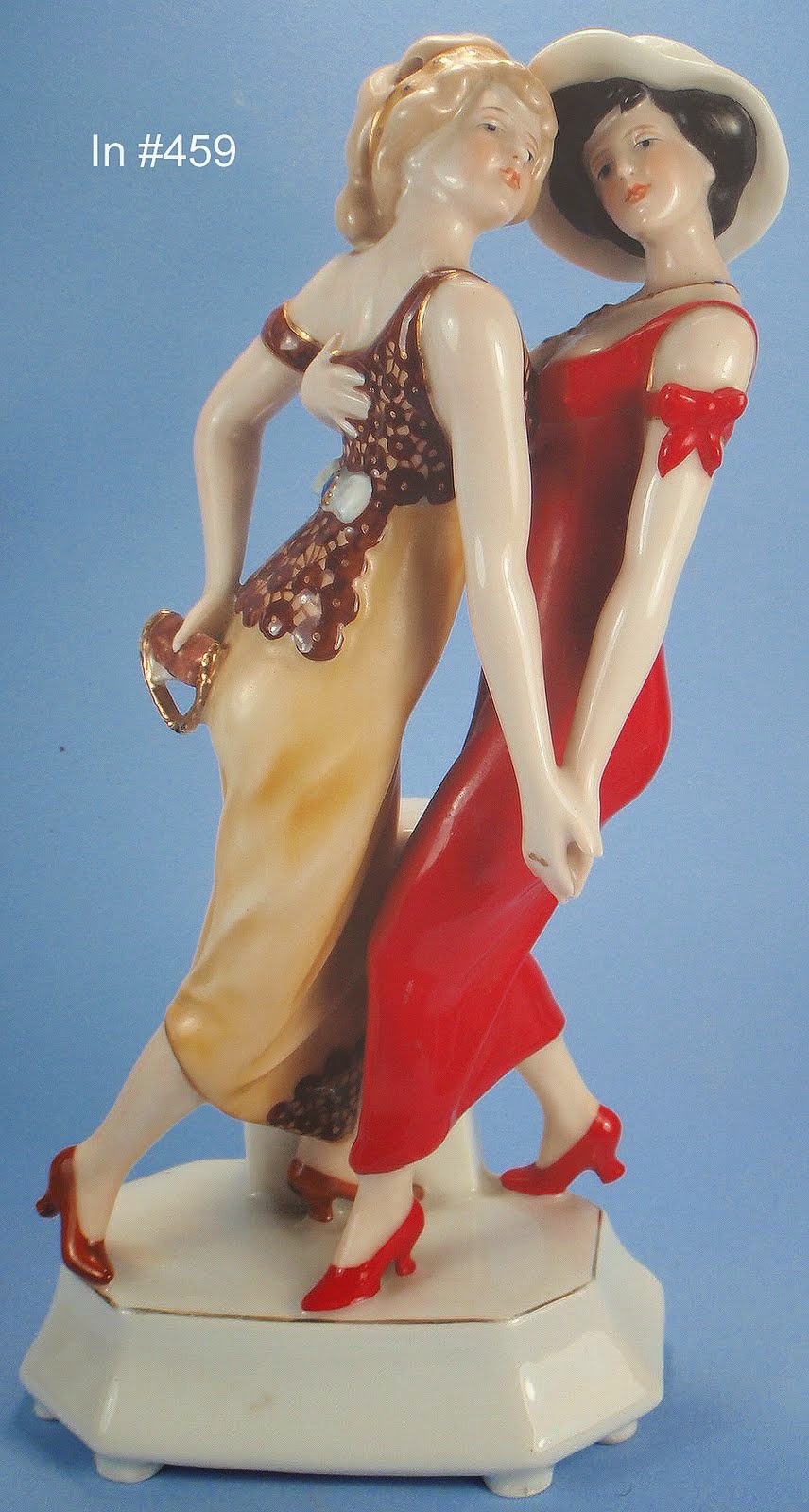 Doing a little research on the Internet, I came across this postcard picturing another prancing pair. The style of the painting seemed similar to that of the first image, and the signature appeared to be the same in style and shape. But really first caught my eye, was that this second image also inspired a figurine in my collection. . . . 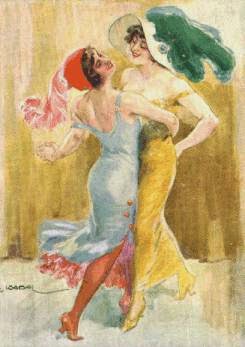 Clad in gowns covered in glitter, described in German catalogues as flittergold, these bisque tangoing ladies outfitted in Edwardian elegance are 5.25 inches tall and incised “Germany 8918.” 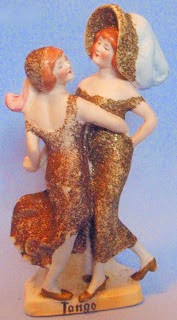 The signature on the postcard is "Usabal." A little research on vintage postcard websites found Usabal was a prolific painter of seductive Edwardian beauties, and had produced a series of couples, male and female or women, entwined in the tango, including both of these images. However, the artist was variously referred to as Louis Usabal, Luis Usabal, Lotte Usabal, or Lottie Usabal, and was identified as Italian, German, or Spanish. After little more research, I came across footage of Spanish artist Luiz Usabal Y Hernandez (1876-1937) painting portraits of silent screen sirens (in the film, he is referred to as "Louis Usabal, famous artist from old Valencia in Spain"). Pulling up examples of Luiz/Louis Usabal's art, including his movie star porfolio, it was clear to me he is the artist of these two images. His style is the same, the signatures are identical, and the time period is right.
0 comments