. . . but in this case, this curious kitty is looking at something of a far more intimate nature.  No doubt another play on the double entendre regarding an affectionate name for a cat and vulgar slang for a woman's private parts, this prurient pussycat appears to be peering up her mistress's skirt.  This 4.25-inch tall bisque figurine is incised only “6435” on the back of the chair, but is certainly of German origin. 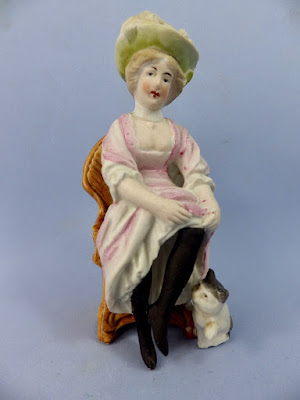 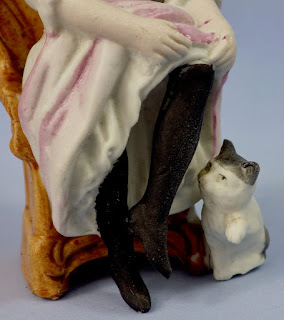 This lounging lady is of ivory and hails from China.  Such reclining nude carvings are called "doctor's dolls," based on claims that in ancient China a proper woman would not allow a doctor to physically examine her and would instead point out the ailing area on an ivory figurine of a nude woman.  Some experts challenge the truth of this tale, arguing that these carvings were erotic in nature and never intended to be used for diagnosis.  Whether these carvings were meant for therapeutic or titillation purposes, they were popular from the 1800s through the Convention of International Trade in Endangered Species (CITES) ban on the ivory trade in 1989.  Many were produced just for the tourist trade; when I visited China and Hong Kong in 1988, I saw scads of these scantily clad ladies in shop windows seeking to tantalize tourists and their dollars.  Most of these so-called doctor's dolls strike a standard pose, the lady lying on her side, leaning on one elbow, the other hand cupping a breast or modestly covering her crotch, with tiny bound feet clad in pointed slippers.  The carving varies from exquisite to mediocre and it is not uncommon to find a piece has been artificially aged by staining or heating to produce "age cracks."  This ivory belle appears to be an older piece and is more unusual as she is lying on her back and has dainty bare feet.  The carving is quite good, even indicating some structure to her abdomen, as well as details such as her flowing hair and her flower.

Her lacquer stand was carved especially for her, with indentations conforming to her curves.  Unfortunately, years ago it appears that someone tried to secure her to her stand with tape and the remnants of the adhesive have eaten into the finish.