An Italian Half Doll by Richard Ginori? 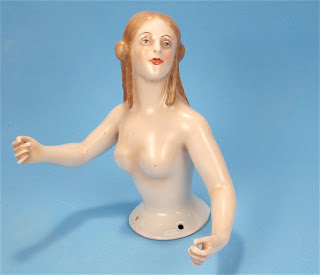 In 1997, my parents spent the summer in Florence, Italy, where my father was teaching a summer law course. My mother found this exquisite pincushion doll in a small antique shop near their apartment in Santa Croce Square. 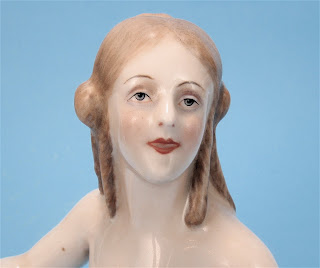 She does not resemble any half dolls by known German or French makers. Her facial painting is very unusual, with a grayish lavender shading around her eyes, as well as shading between her parted lips. The eyes have an upper lid line in black, while the lower is red, and the blue eyes have large black pupils and an iris outlined in a dark color. Her blonde hair has darker brushstrokes, giving the illusion of individual tresses. The fine porcelain has a very smooth creamy color, with darker shading between her breasts and fingers. Although she was awarded a blue ribbon at an annual convention of the United Federation of Doll Clubs, no dealer or collector I have shown her to has been able to identify her maker.

Some time back, at the Pottery and Glass forum on eBay, a fellow eBayer put up a beautiful female porcelain figurine for identification. I immediately saw the striking resemblance between this figurine and my half doll. The figurine was marked "Italy" and with a crowned "G," which was identified as the mark of Richard Ginori. I posted a picture of my half doll, and the other participants affirmed the remarkable resemblance. One of the participants, Walter Del Pellegrino, co-author of the book Italian Pottery Marks from Cantagalli to Fornasetti, stated that in his opinion this half doll has all the characteristics of being manufactured by Ginori. He also said that Ginori has a museum in Florence that includes an archive of factory catalogues and documents. 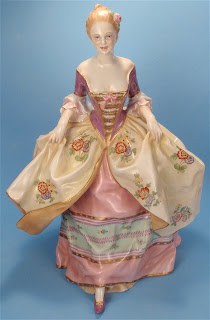 I then began a search for my own Ginori figurine I could use as a comparison piece for my half doll. I quickly found that the fine quality figurines are not common and they can be quite pricey. Finally, I secured this delicate damsel at a reasonable price because her slender neck has been broken and reglued. She is the same mold and model as the figurine in the eBay discussion, although the painting on my figurine is a bit more elaborate and she carries the crowned "N" mark without the Ginori name, which the company used on its products made in Doccia, Florence, from 1830 to 1890. 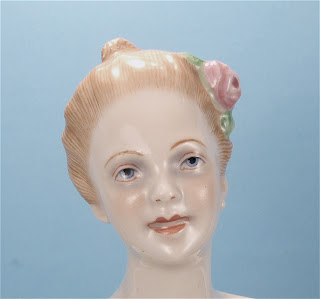 She has the same creamy ivory complexion as my half doll, with the darker sharing between the breasts and the fingers. The shaping of the arched eyebrows is identical and both pieces have the same shadowing around the eyes. The unusual painting of the eyes, with the black upper lid, red lower lid, and blue iris outlined in a darker color, is also the same. Both ladies have the same parted smiling lips with shading between. The hair on both figurines is overpainted with darker lines to give the illusion of individual tresses and the facial features, such as the broad foreheads and small pointed chins, also show a family resemblance.

So, is my pretty pincushion doll by Ginori? If she is, it would be a fantastic find for collectors of Italian porcelain and antique dolls, showing that Italy also produced high quality half dolls. I will be contacting the Museo Richard-Ginori della Manifattura di Doccia and asking for their help in my quest. I will update this blog if or when I receive further information.

A Bevy Of Bathing Beauty Bottles

The German firm of Schafer and Vater is renown for its comic or naughty nippers in a wide variety of shapes and sizes.  These novelty bottles once held a "nip" of alcohol and was often given away by saloons, liquor stores, or at carnivals as gifts or prizes.  Voluptuous bathing beauties in skin-tight swimsuits were a popular subject on Schafer's bawdy bottles.

This 5.5 tall bottle features a lithe lady moving slow and steady on the shell of her tortoise steed.  Although the blue and white bisque resembles Wedgwood jasperware, the white bas relief was not molded separately and applied to the blue background, but instead the effect was clearly created by carefully layering blue and white slip in the mold.  The bisque is excellent and the details sharply modeled.  Like many Schafer products, it carries only a number, in this case an incised “3877” on the back. 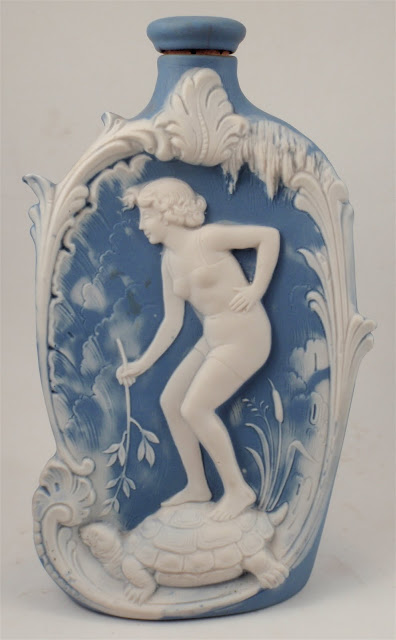 Another jasperware jug, this one featuring a bathing belle receiving a literal seal of approval (well, actually a sea lion).  Incised “3878” on back edge, this bottle is 5 inches tall. 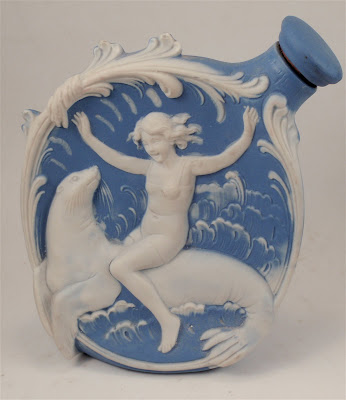 This 5 inch tall bisque bottle features a helpful elephant showering a smiling bathing beauty with both water and attention.  It is incised  “3877” on back. 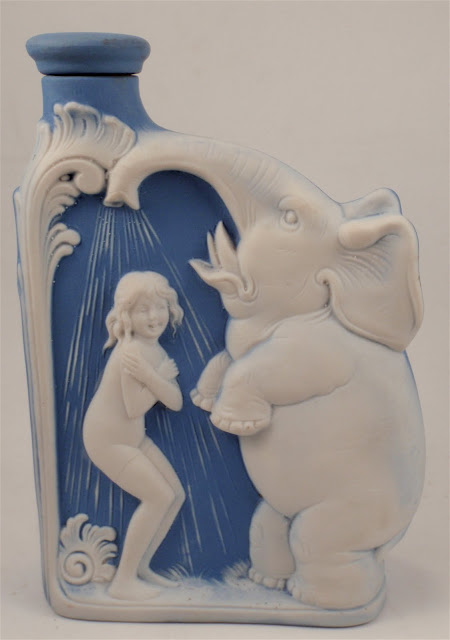 The Schafer nippers were offered both in jasperware and tinted bisque.  This more conventional shower scene features a bathing belle rinsing off with her rather unhappy-looking canine companion.  Incised” 3864," this bottle is 8 inches tall. 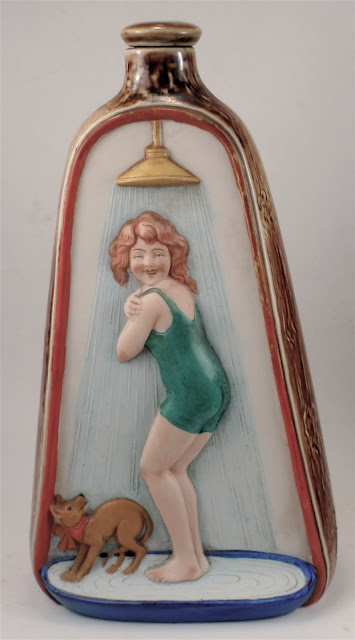 Another tinted bisque bottle, this one showing a swimmer having to deal with some very fresh seafood.  It is is incised “3876” on the back of base and is 4.5 inches tall. 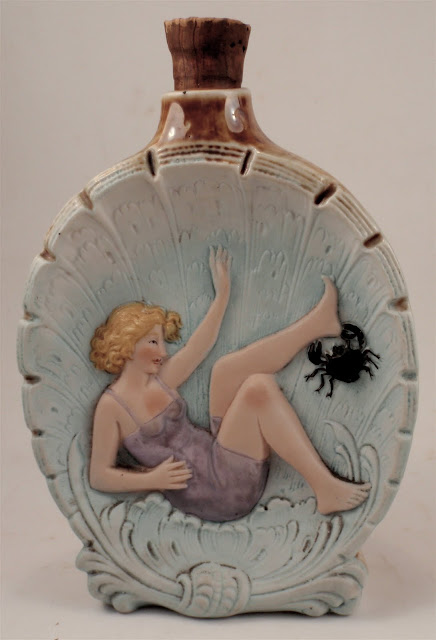