All in a Bustle

This beautiful belle hides a secret under her hinged bustle. . . 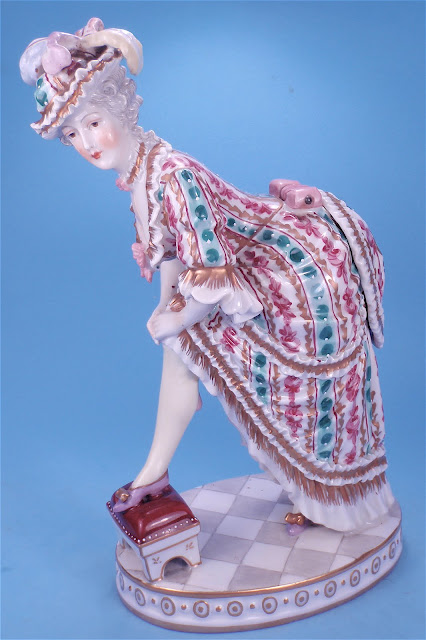 . . . which, when lifted, reveals a brown beetle crawling up her bare bottom. The beetle is actually molded, not merely painted on. The painting on this high-quality porcelain piece is of the finest, with delicately hand painted floral designs alternating with decorative designs and gilt touches. Not visible in the picture is the dangling garter ribbon at her raised left knee. The quality of the decoration is evident in her hair, with its elaborate tiers of curls striated with individually painted gray lines, and her finely painted aristocratic features. This china lady is 7.25 inches tall. She is an uncommon and hard to find figurine. However, she is also being reproduced. The new piece has lost the many fine painted details of the old, especially the hair, which lacks the delicate striations, and the facial features, which are very simply and blandly painted. The elaborate handpainted designs on the dress are reduced to alternating stripes in the new version, which carries a mark with cyrillic (Russian) lettering. The repro also does not have the garter ribbon. But perhaps the most important detail missing from the reproduction is the bug on her buttocks! 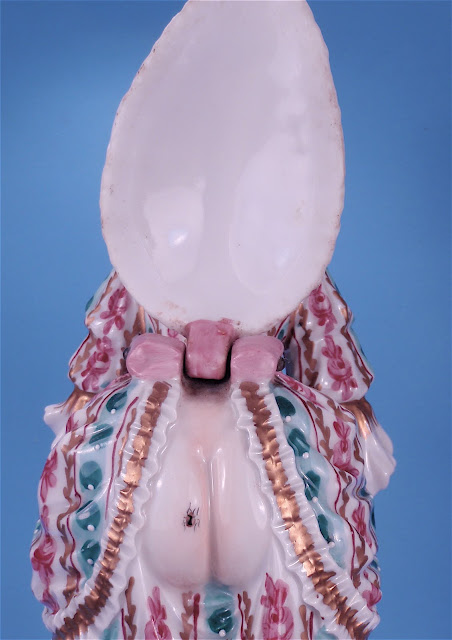 Another lovely lady whose hinged bustle lifts up to expose a rather voluptuous pair of buttocks. I have never seen this particular bustle belle before. She is superbly modeled, from the ruffles in her cap to her gracefully gesturing hands. There is an applied rose, carefully built up of tiny porcelain petals, tucked into her bosom and at her feet are a variety of bright applied flowers. Her light brown hair has darker fine striations, giving the appearance of individual tresses, and the floral design on her underskirt is all hand painted. Her face is particularly pretty, with finely painted features, including brown eyes and parted lips. 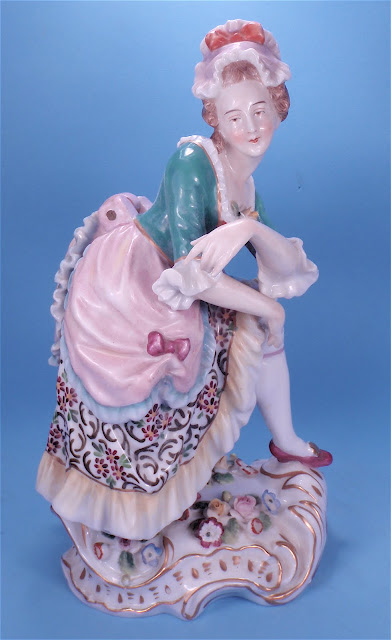 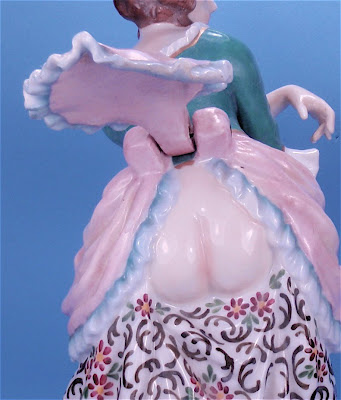 Although this piece is marked with the gold anchor used by Chelsea porcelain factory from 1756 to 1769, this mark was widely copied by porcelain companies throughout Europe. While she is beautifully modeled and decorated, the coloring and style are not that of a 18th century figurine. The main indicator that this piece is NOT Chelsea is that it is not modeled of the soft paste porcelain produced by that factory. China first produced what is called hard paste or true porcelain, a mixture of a white clay called kaolin and feldspar. The resulting slip is plastic and can be modeled or molded into intricate shapes or the thinnest vases and, fired at high temperatures, produces a hard, bright white porcelain with smooth, fine grain. The Chinese guarded the secret of their porcelain, which was highly sought after by Europeans, who referred to it as “white gold.” Europeans tried to discover the formula for porcelain, and in the late 1500s, in Italy, soft paste porcelain was created. Soft paste porcelain does not vitrify like hard paste porcelain and must be fired at lower temperatures. It has a more creamy background and is more porous and appears less glassy than hard paste. Soft paste porcelain is also not as plastic as hard paste porcelain and is more difficult to model. Hard paste porcelain was first produced at Meissen in the early 1700s (for the fascinating story of the discovery of the formula for hard paste porcelain by an imprisoned alchemist, check out the book the The Arcanum by Janet Gleeson). Although most people now use the terms china and porcelain changeably, some collectors argue that porcelain should be applied only to the finest, most translucent, high-fired wares. 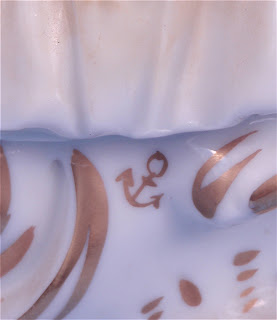 If she is not Chelsea, who made her? One possibility is the French company of Samson Edmé et Cie was established by Edmé Samson, also known as Samson the Imitator, which produced high quality copies of early Meissen, Dresden, Chelsea, and other famous porcelains, up to the early 1900s. However, I suspect she is a fine quality piece produced by a German manufacturer, sometime in the late 1800s or early 1900s. But, I did not add her to my collection because I thought she was a rare piece of Chelsea, I acquired her because she is NAUGHTY!

The is a Japanese copy of the first bustle belle. Although unmarked, the facial painting, the orangish blushing, and the decal flowers and painting all point to a Japanese manufacturer. 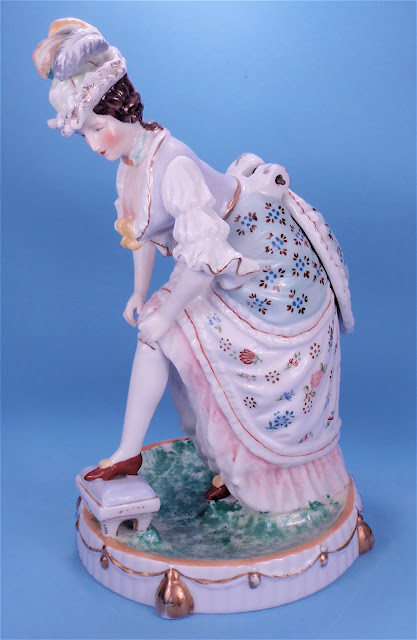 Anyone lifting her bustle hoping for a peek at some callipygian charms will be sorely disappointed, because she is hollow! 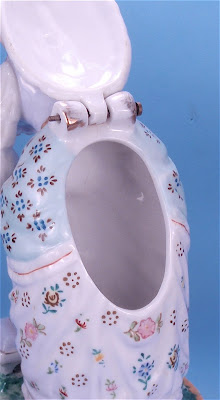 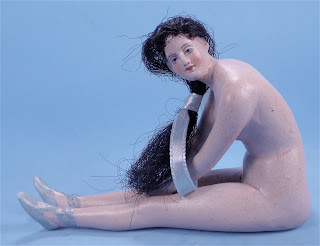 This bisque bathing belle has been appearing for years in antiques markets and online auctions. She is something of a lady of mystery. She is made of tinted bisque and has a uneven, and sometimes shiny, complexion. The bisque is rather rough, so it does not have the appearance of new bisque, and the painting is appropriate for an old piece. She often has a black long wig, but has also been found bald or in various outfits. 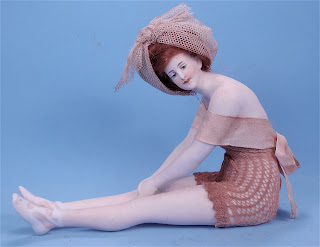 She is clearly a copy of this lissome and lovely Galluba and Hofmann lady. This genuine Galluba has the excellent bisque, flawless pale complexion, and exquisite workmanship that are the hallmarks of an authentic Galluba beauty. The modeling on the copy is not as crisp as on the original, which suggests the copy either was made from a worn mold or molded from an existing piece. 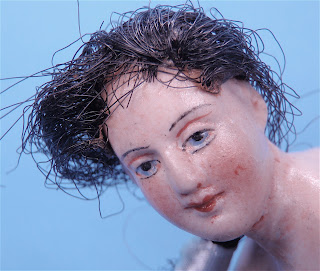 The face on the copy is rather well done. . . 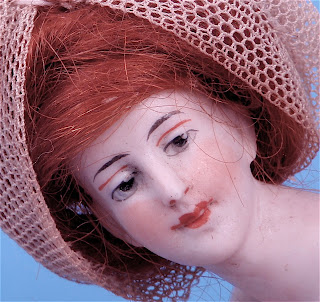 but does not match the delicate and detailed features of the true Galluba. The intaglio eyes with deep pupils and white highlights are standard for Galluba. The copy does not have intaglio eyes, giving her a rather flat, vacant look. Whoever is making the copy is clearly using the Galluba face as a template. 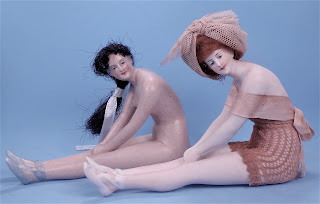 Once it is set next to the extraordinary original, it is easy to distinguish the copy.


Mundial Company of Belgium is now producing its own version of this Galluba model. The facial painting and finishing on the Mundial copy of low quality, but could fool honest dealers and collectors who have not had a chance to handle the scarce and exquisite original. Mundial is also producing the figurine with painted stockings and a mask. Mundial has added to its already extensive line of half dolls, bathing beauties, and all bisque dolls, and all collectors and dealers should check out the newest catalogue website. So far, it appears the Mundial still continues to fail to clearly mark its copious copies. However, many of the pieces it produces, because they were made from molds taken from the antique originals, carry old numbers and marks. The peices are also often made look worn and dirty, giving these new items the look of authentic age. These new "old" items are appearing in antiques markets, shops, shows, and online auctions, where they are often offered as antique.
0 comments