In 1879, Italian artist Odoardo Tabbachi created "La Tuffolina" (the diver). According to a June 21, 1879, supplement to Scientific American, the pictured sculpture was "immediately purchased by the King of Italy." The article continues: "The figure could hardly be rendered more beautiful, elegant, or sympathetic, nor more graceful in attitude, representing as it does the bather in the act of diving into the water as if she was an expert swimmer." The article reports that the lovely Tuffolina had so many admirers, "the fortunate sculptor will have difficulty to fill all the orders he has received for copies." 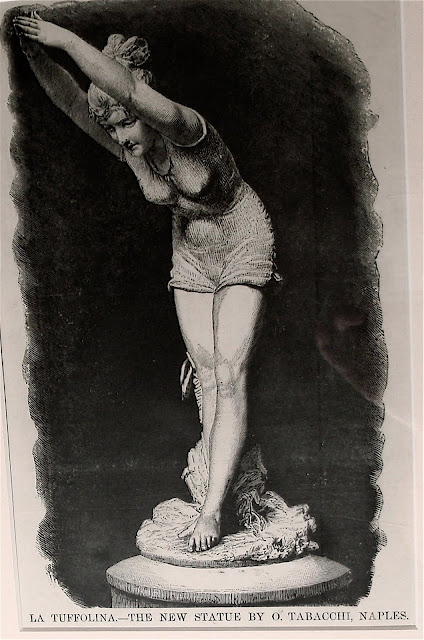 Tabacchi's delectable diver continued to attract admirers for decades, and many German firms, such as Dressel, Kister, and Company, produced their own adaptations of Ms. Tuffolina, in both bisque and china and in a wide variety of sizes, from diminutive damsels to super-sized sirens. 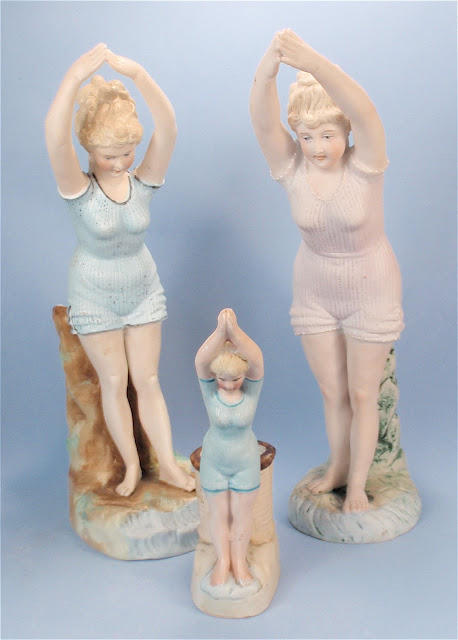 However, there is a very scarce male version (would he be El Tuffolino?). In all my years of collecting, I have only come across him twice before. This is one big boy, at 22 inches tall. For some reason, the other two Tuffolinos were also gigantic (at least in the world of bathing beauty figurines), and each was accompanied by an equally large lady counterpart.

He is of excellent sharp bisque and is extremely well sculpted, from the waves in his hair to the waves at his bare feet.

The painting is as well done and detailed as the modeling. Under his base, he is incised "No. 302" and "3." 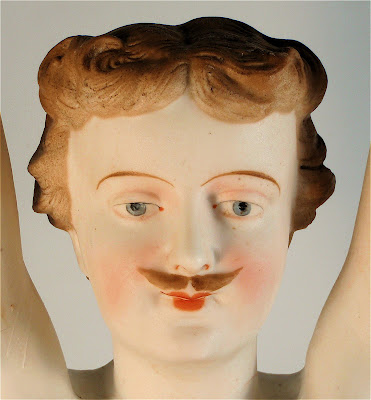 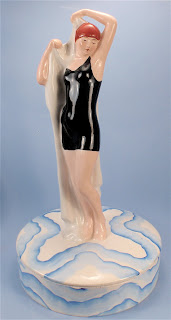 This bathing beauty is actually the top of a very big powder box. Standing 10 inches tall, she is made of ceramic and decorated in a bold art deco style.

If the pose appears familiar, the belle on the box is borrowed from the Bath of Psyche by Lord Frederic Leighton (1830-1896). Leighton did a bit of borrowing himself, as the pose of Psyche is based on an ancient statue of Venus he had seen in Naples. The Roman poet Lucius Apuleius sets out the legend of Psyche in his work The Golden Ass or Metamorphosis. Psyche was a beautiful mortal woman who became the paramour of Cupid. 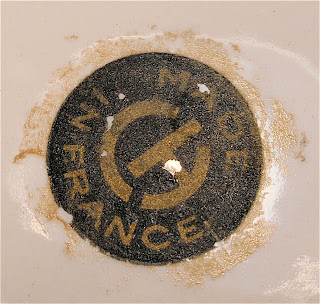