After a detour via bronze, this post returns to the theme of bawdy bisque. This lissome lady appears to have forgotten her gavel, among other things. An unusual seated figure, she is by my favorite maker, A. W. Fr. Kister. As it typical of this company, everything is of the highest quality, from the flawless bisque to the superb sculpting. She is 6.5 inches tall and has her original mohair wig. 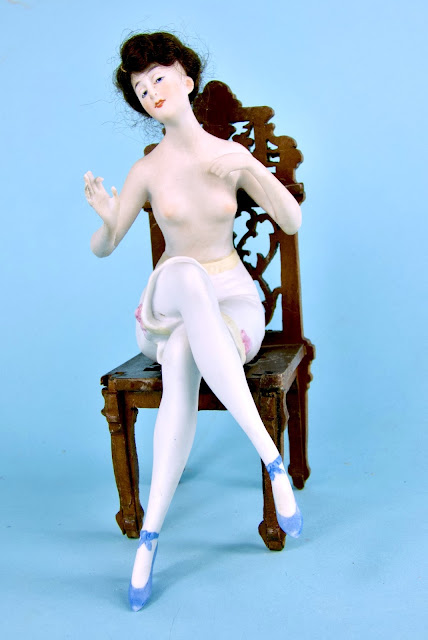 There is a channel through her hips that could be used to attach her to a pincushion. Her current seat is an antique dollhouse chair.  The slightly molded and tinted nipples are a unique characteristic of Kister's beautiful bisque belles. . . 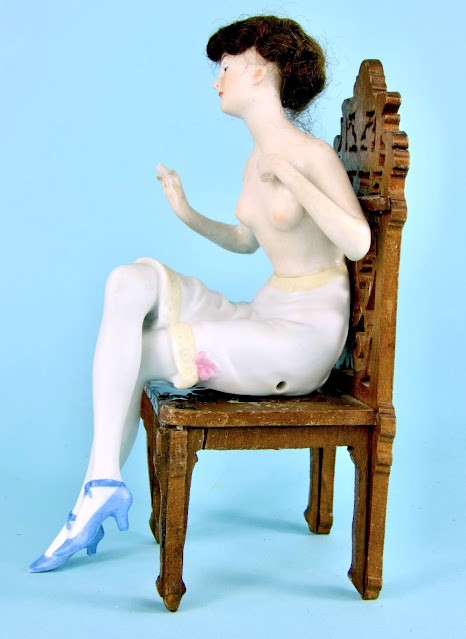 but her identity is further confirmed, as underneath she is incised with the cross-hatch "S" mark of this company. 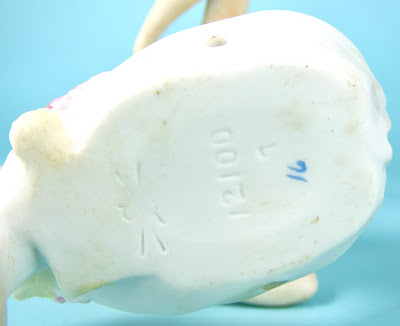 A number of posts on this blog have featured female figures with strategically placed kitty-cats, a double-entendre of "pussy" as an affectionate name for a cat and as a vulgar reference to female genitalia. The Barrison Sisters built an entire vaudeville career in the 1890s by showing off their "pussies" on stage. This bawdy bronze is a slightly different play on pussy. A cute kitten sits on a marble base. Its realistic fluffy coat and appealing face are superbly sculpted, highlighted with a deep golden patina. Just 5 inches high, but with substantial heft, it could have served as a paperweight for a gentleman's desk. 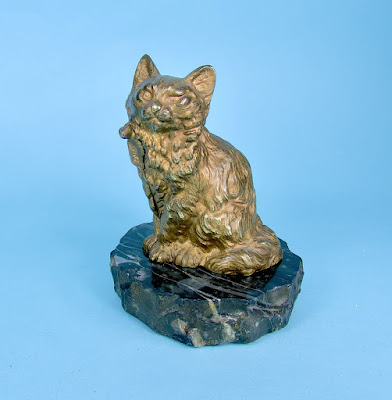 Why a gentleman? Well, this prurient pussy swings open to expose a kneeling nude lady, smugly smiling as she clutches a cache of jewels. She has a subtler golden patina than her feline friend, and her hair and gems are a softly-tinted rose. 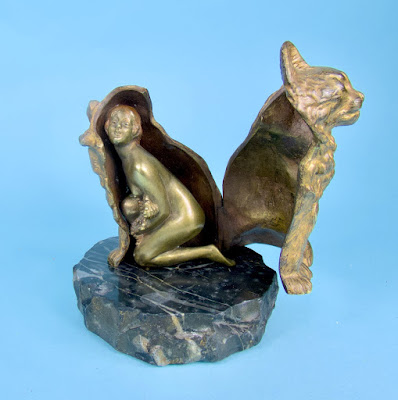 Almost obscured by the curls in the fur, "AUSTRIA" is stamped on the back rim of the cat. Beginning in the mid-19th century, Austria, particularly in Vienna, was famous for its foundries and ateliers producing finely crafted artistic bronzes. The works covered a wide variety of genres, including classical studies, animals and nature, comic subjects, Orientalist images, and even erotic images. Often the naughty bits were concealed in a seemingly innocuous subject, only to be revealed by a push of a button or lifting a up a piece of metal drapery. There is a wide variety of these Austria sculptures  concealing salacious secrets, with nubile nudes hidden within an assortment of owls, mice, sphinxes, mummy cases, Eastern idols, and, perhaps most appropriately, an iron maiden. 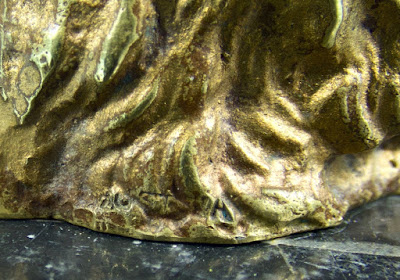 Another belle in bronze, but far less brazen than the previously posted pair. This demure damsel is "Innocence" or "L'innocence" by Demétre Chiparus (1886-1947), one of the iconic sculptors of the art deco period. Often inspired by dancers and performers from the Ballet Russes and the French stage, as well as archeological discoveries in Egypt, Chiparus was renown for his chryselephantine sculptures, perfectly capturing the pose and facial expression of his subject. Carved from ivory and clad in a rather negligible negligee of cold-painted bronze, this modest maiden is 7 inches high and stands on a 3-inch tall marble base. The skilled sculptor managed to make the metal seem to cling to, and subtly emphasize, her soft curves.

Her side-ways glance and sly smile seem a little bit too knowing, but in this country one is presumed innocent until proven guilty. 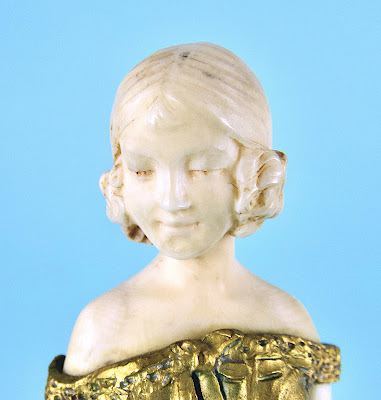 Chiparus' signature is faintly engraved on the edge of the base by her feet. 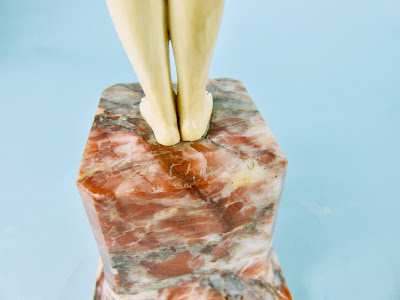 Chiparus was born in Romania. After studying sculpture in Italy, in 1912 he traveled to Paris to continue his studies. He began with realistic works of animals and beguiling portraits of children, but by the 1920s he had created his signature style that would become synonymous with art deco sculpture. Chiparus worked closely with the Edmond Etling and Cie Foundry and his works were often displayed in the Etling specialty store. Chiparus sold the reproduction rights to the foundry and the same work can be found in a variety of sizes and materials. Mademoiselle Innocence can be found in chryselephantine, like this example. or completely cast in bronze or carved in ivory. However, Chiparus ensured that any creations carrying his name were of the highest quality and even in their day, his works were expensive and exclusive.
Because of his extraordinary talent and his renown as one of the premier sculptors in the art deco style, Chiparus' works are in high demand, and consequently there are a lot of fakes out there. Most of the copies are cast completely in bronze. Although these copies may carry his signature, they have lost his skilled touch. The fine details and chasing are lost or blurred, the poses stiff, the gestures clumsy, and any painted patina too heavy and garish. There have been attempts in the past to recreate Chiparus' chryselephantine creations, typically using fossilized mammoth ivory. The Arnold Quinn Studio produced a number of chryselephantine copies of some of Chiparus' most iconic images. Many years ago, I was in Las Vegas for a convention and came upon a gallery offering works from this studio. Of patinated bronze and carved ivory, the works were on elaborate bases of onyx and marble. They were very expensive and the salesman was quite coy regarding whether the works were originals or copies. Although of higher quality than the typical Chiparus copies, compared to the original carvings that graced Chiparus' creations, the ivory faces were flat and mask-like, the hands stiff, and the arms and legs graceless and lacking any musculature or anatomical detail. The ivory often did not fit smoothly with the bronze, suggesting to me that it was carved far from the foundry, probably in another country with craftsmen copying a model. The salesman would or could not tell me where the ivory was carved, but the shapes of the faces and style of the expressions reminded me of ivory sculpture from India. Although it appears that the studio is now defunct, these works, often with a fake Etling foundry mark, show up periodically at auction advertised as authentic Chiparus. In the past, high-end antiques galleries in New York and Florida have been sued over claims that they misrepresented reproduction Chiparus artworks as authentic originals. Chiparus sculptures also show up at fraudulent estate sales known as "house packing," when unscrupulous dealers rent an empty house, cram it full of recast bronzes and giclee prints with the signatures of "big name" artists, as well as modern Oriental rugs and Chinese import porcelain, and then try to pass off this conglomeration of fakes and forgeries as a collector's estate. Instead of innocent until proven guilty, when coming upon a sculpture attributed to Chiparus, the best assumption is fake until proven authentic.
0 comments