Anne Harriet Fish (1890-1964), although born in Britain became a renown artist, illustrator, and cartoonist on both sides of the "pond." Her work appeared in Condé Nast's Vanity Fair, Vogue, and Tatler. Fish also created designs for Fulper Pottery of Flemington, New Jersey, and Hubley Manufacturing Company, which made cast iron toys and novelties, such as doorstops.  This lamp base is an Anne Fish design for Fulper.  It features two very stylized flapper bathing belles sitting back to back.  These colorful cuties are 6.25 inches high. 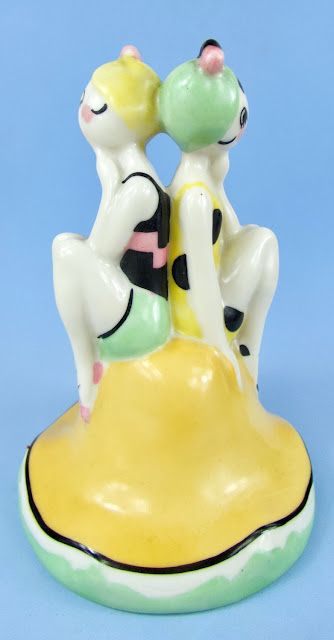 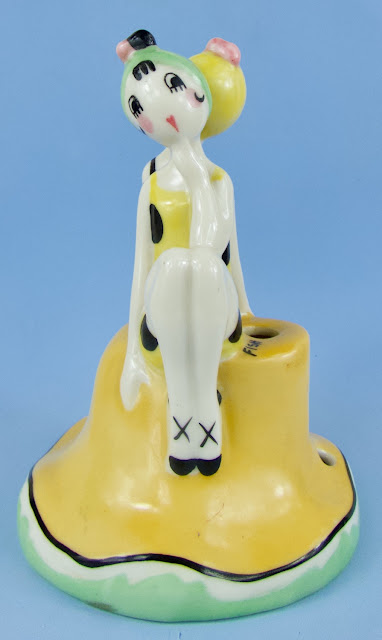 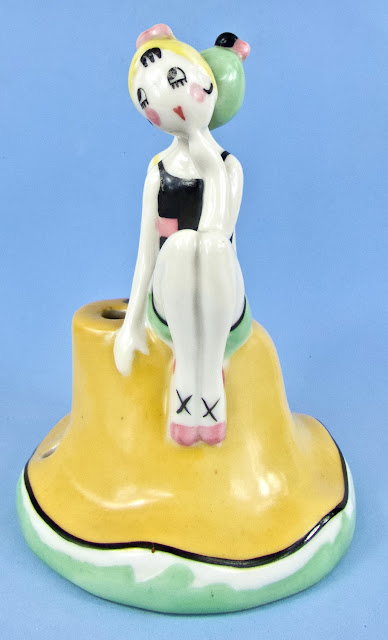 Her signature appears by the hole that would have held the lamp stem.  She signed her drawings and illustrations with only her last name. 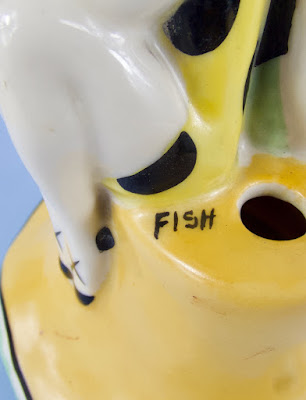 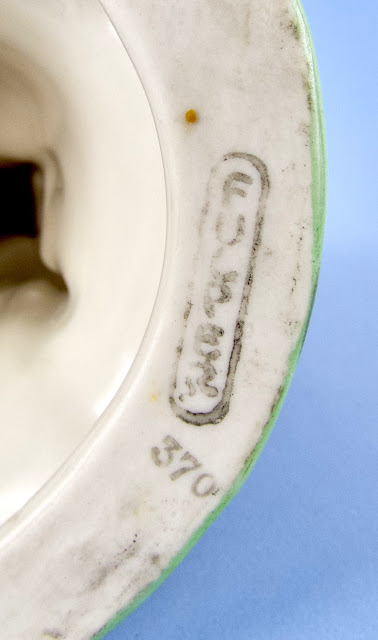 Fish's illustrations for Vanity Fair, first published in 1913, captured the essence of the new woman, youthful, slender, and always ready for a little flirtation or fun. Over a roughly 15-year period, Fish created some 30 covers for the magazine, as well as many inside illustrations.  Two covers in particular portray similar dual bathing belles. This one dates from February 1916. 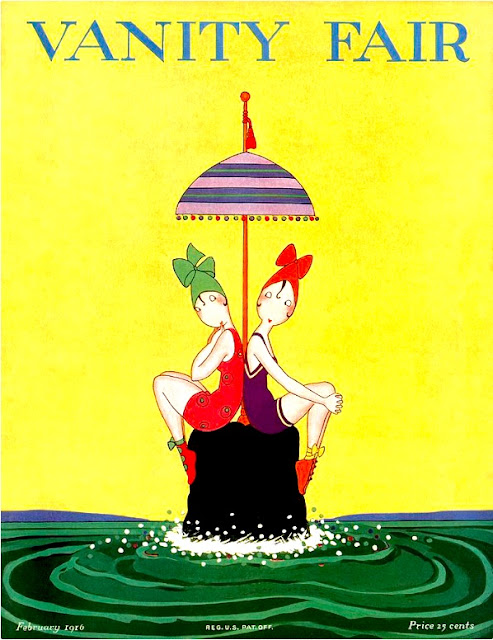 Fish returned to the theme with this June 1923 cover. Condé Nast has an online store where you can view a collection of Fish covers, as well as order a print of your favorite. 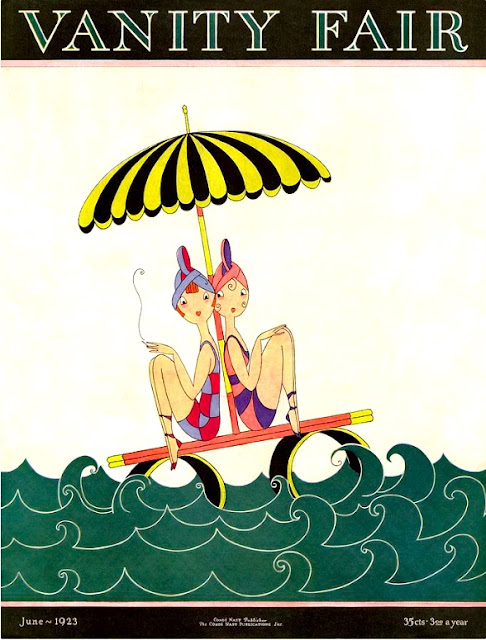 This pair of bathers perching on a perfume bottle appeared earlier on this blog.  The bottle is stamped underneath “Bavaria” and is incised “X.F. 269,” “Dep,” and with the William Goebel crown mark.  It is clear that this Goebel piece was inspired by the work of this popular illustrator of the period. 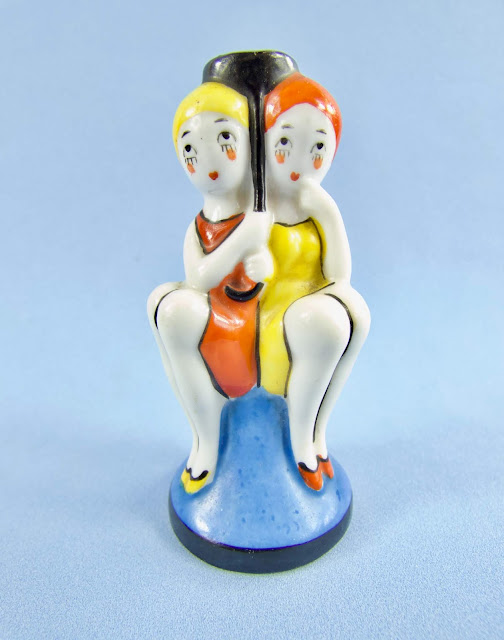 Open the door, my princess dear,
Open the door to thy true love here!
And mind the words that thou and I said
By the fountain cool, in the greenwood shade.

In the fairy tale "The Frog Prince," a princess playing by a well accidentally drops her golden ball into it.  A frog offers to fetch it for her if she promises to be his playmate and bring him to live with her in her castle.  The princess agrees, but when the frog returns her ball, she runs away, leaving, so she thinks, the frog behind,  However, soon the frog appears at the castle, demanding entrance.  When the king hears the frog's story, he tells his daughter she must keep her promise and she reluctantly allows the frog to sit by her at the table and eat out of her plate.  Later the frog demands that the princess carry him to her bedroom, place him on her bed, and let him sleep on her pillow.  In some versions, after the frog sleeps there for three nights, he turns into a handsome prince; in others, he changes after the princess either kisses him or, in a bizarre and violent twist, slams him against a wall.

If this figurine of a kneeling nude confronting a rather forward frog was inspired by the fairy tale, it looks as if the ambitious amphibian has demanded a little more than merely sleeping on the lovely lady's pillow! Of excellent china, this figurine is this 5.5 inches tall and was created by the German firm of Galluba and Hofmann. 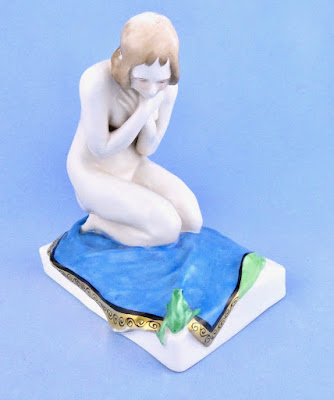 From the woman's slightly smiling expression, she seems willing to accede to the frog's demands on the chance there might just be an enchanted prince involved. 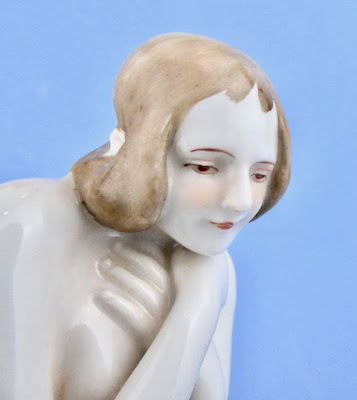 Underneath the base the figurine is incised "21" and stamped in green with Galluba and Hofmann crowned shield mark. 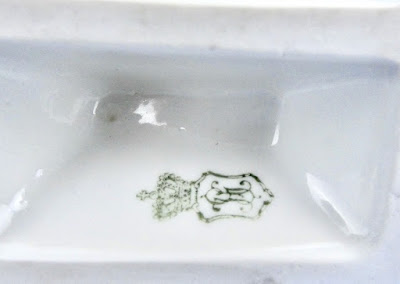 Also incised on left rear edge of the base is what appears to be "L Lonk (or maybe "Lank?") Nov 25." It is not unusual to find a sculptor's signature on fine bisque and china figurines of the early 1900s.  Renown German sculptor Otto Poertzel (1876-1963) initially trained and worked as a porcelain modeler at A. W. Fr. Kister., where his father was already a designer, and some figurines from this factory are incised with his signature.  However, I have not been able to trace the artist of this female and her froggy friend.