This boxing belle may be related to the sultry sultana featured earlier on this blog.  Of high quality plaster, she shares the same slender modeling, unusual angular face with narrow eyes, and round reddish-brown base.  Wearing her original mohair wig, this pulchritudinous pugilist is 10.5 inches tall and, unfortunately, unmarked.  I wonder if she was originally costumed, and if so, how.  The modeling of her arms against her abdomen would have made dressing difficult, and her stylish high heels would appear out of place in the boxing ring. 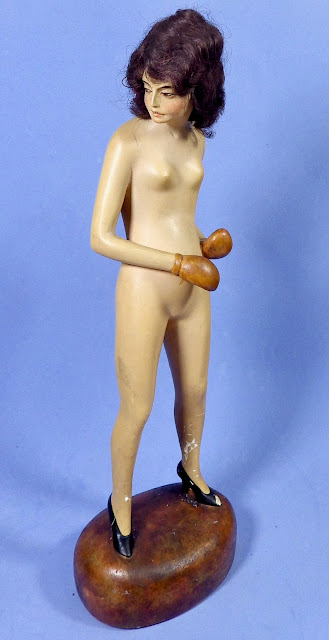 However, in the 1927 silent film, "Rough House Rosie," star Clara Bow appeared in boxing garb, complete with pumps. Known as the "It Girl," Bow, with her head full of henna curls and vivacious, carefree persona, personified the young women of the flapper era. The movie was meant as a vehicle for Bow, one of the period's most popular actresses, so it is quite possible that some manufacturer created a pretty plaster prizefighter "inspired" by Bow in her brief boxing attire.  Unfortunately, the film has been lost, with only the trailer and some still photographs remaining. 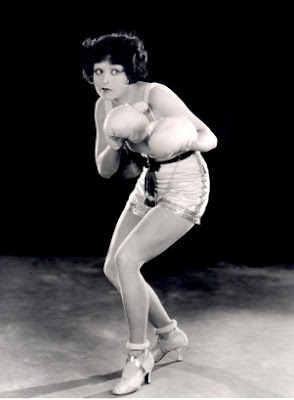 A close up of her face shows the meticulous modeling, including parted lips exposing a row of tiny teeth. 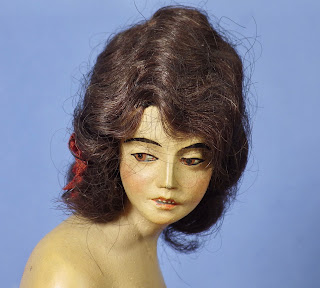 A mere 1.75 inches high, including her base, this tiny china bathing beauty is surprisingly detailed and delicately decorated.  Her unusual base has a channel around rim with sew hole on each side.  Although marked only with a freehand "g" in black inside the base, she can be definitely attributed to the German firm of William Goebel. 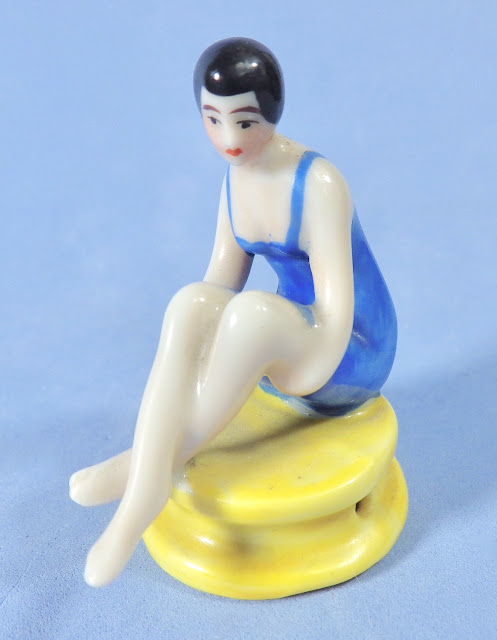 One reason I can be so certain of my attribution is this quartet of diminutive damsels who have been featured earlier on this blog.  Although only 2.5 inches high, the figurine of the beach belle in the hooded “wicker" beach chair is incised underneath with the Goebel crowned intertwined “G” and “W” and what appears to be “P.O.” over “641.”  This is the only piece of the quartet that is marked.  She strikes a similar pose as that of the petite pincushion miss, with her hands tucked under her knees and her legs crossed at the ankle, though hers are left over right.  However the 1.25-inch long and high seated bathing beauty in red, who is clearly part of this series, is the identical model as that used on the pincushion base.  The reclining lady in red is 2.5 inches long and the decorator has added dots of blush to her knees.  The gal in green is a mere 2 inches long.  All these tiny treasures beautifully modeled and decorated considering their amazingly small size. 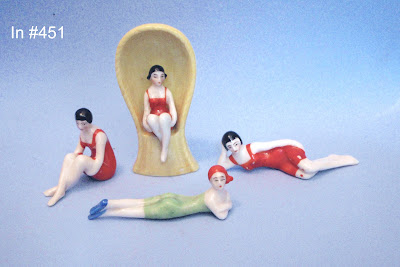