This beautiful bisque half doll by Galluba and Hofmann appears to be shyly turning away from the letter in her outstretched hand.  Is it a missive from the master of her heart?  Is she bashfully offering a love letter to her beau?  Or is it a past-due bill from her hairdresser?  Her elaborate white mohair wig is original.  She is 3.25 inches tall bisque and incised “5694” on back of  her base. 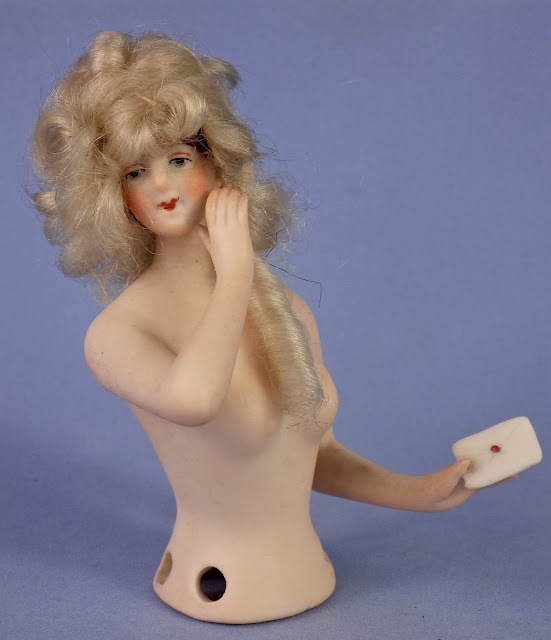 She is the literal half sister of Ms. #473, who has been featured earlier on this blog.  The mold was slightly modified, so that the left arm on the half doll is bent up to allow her to balance on her base.  The gloves worn by Ms. #473 are painted, not molded, allowing the figure to be offered begloved or bare-armed.

Belle (and Beau) of the Ball

Previous posts have featured delightful double figurines by Galluba and Hofmann displaying two voluptuous belles dancing together.  This capering couple by Galluba is unusual for two reasons.  First, the fine figurines are separate, molded to fit together in a fond embrace, tiny holes in the soles of their feet fitting over supporting rods in the base.  Second, one of the partners appears to be a man, dressed in a detailed molded tuxedo, which has been flocked to give it the feel of fabric.  His lovely lady wears her original mohair wig in the typical Galluba chignon and a delicate dress of golden cream silk. Her tinted stockings match her dress and she has molded light blue pumps.  This diminutive double is just 4 inches from the soles of the man's shoes to the tips of the fingers on his raised hand. There are no visible marks.  The wooden base is not original and this dancing duo may have once had a bisque base or decorated a silk-covered candy box or pincushion. 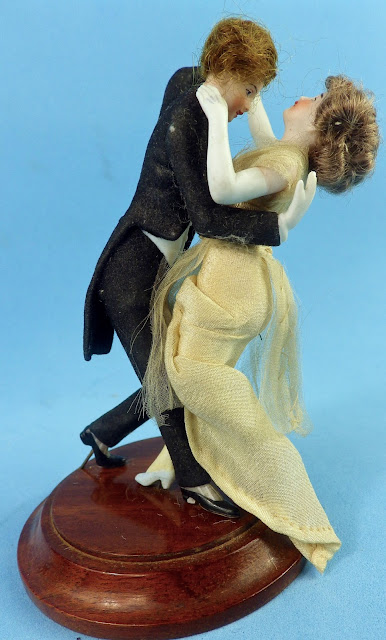 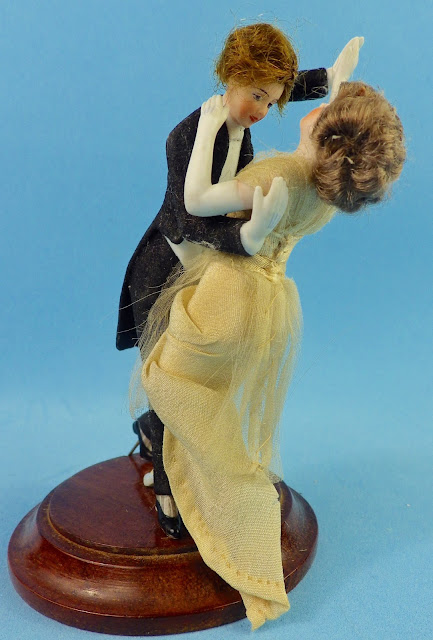 Note I said that one of the pair appears to be a man.  Although "he" has an original short mohair wig, his face is as delicate and feminine as that of his pretty partner.  Galluba was capable of producing figurines with more masculine features.  I wonder if Galluba was flirting with a little notoriety here.  In certain circles of society in the early 1900s, it was fashionably scandalous for a woman to dress as a man. 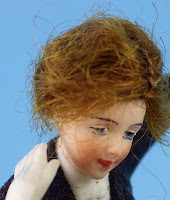 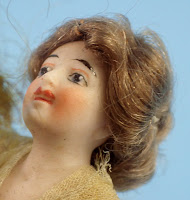 The French author Colette, during this period, displayed her scorn for convention by sometimes dressing in men's suits, at a time when such cross-dressing, outside of the stage, was forbidden by law. 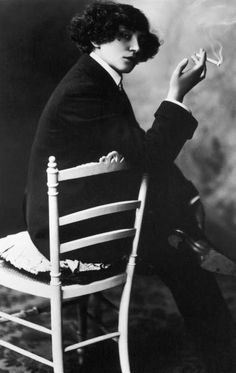 During her early years as a music hall performer and writer, Colette openly engaged in, and wrote about, lesbian relationships.  Marquise Mathilde de Morny, known as Missy, became Colette's lover in 1906, an affair that lasted roughly five years.  Born to an aristocratic family, Missy made no secret of her attraction to women and, following the death of her mother in 1896, began dressing exclusively in men's clothing.  In 1907, Missy performed with Colette at the Moulin Rouge in a pantomime entitled "Rêve d'Égypte" (Dream of Egypt).  Missy, playing an archeologist, unwraps a mummy, revealing an exotically, and scantily, dressed Colette.  The ending, with Missy and Colette exchanging passionate kiss,  caused a riot in the theater. 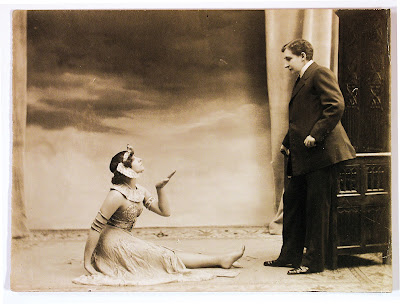