Belles of the Ball, Part 3

These china charmers have been pictured previously on this blog, but they represent yet another version of the beauteous belles of the ball by Galluba and Hofmann. 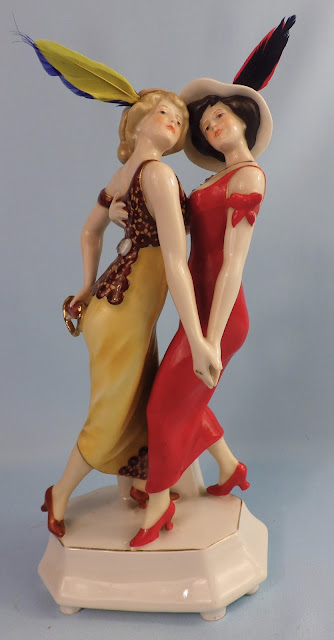 Clearly, this pretty pair was inspired by this postcard by the Spanish artist, Luiz Usabal Y Hernandez, In Galluba's interpretation, the lithe lasses look a bit more ladylike than lascivious, but otherwise Galluba carefully copied everything from the pose to the gowns. 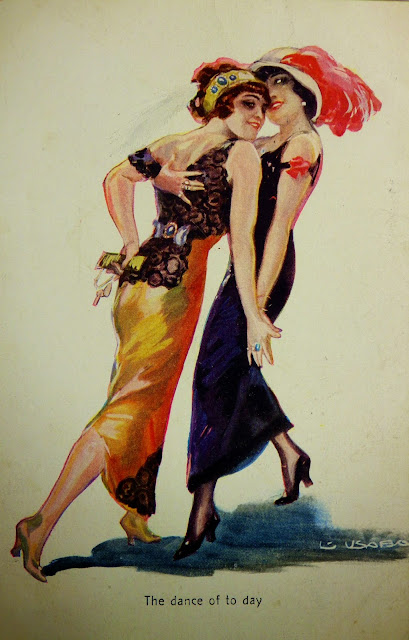 Here all three of Gallubas belles take a turn around the ballroom, showing how one postcard inspired a trio of delectable double damsels. 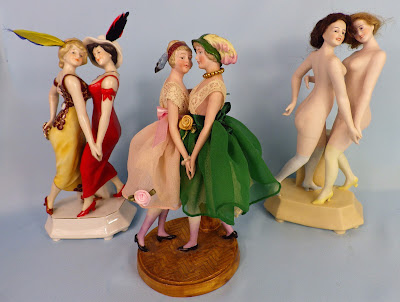 Belles of the Ball, Part 2

These belles of the ball, at 5.25 inches tall, are the littler sisters of the Galluba and Hofmann dancing damsels from my previous post.  Instead of wigs, they flaunt a fashionable molded hat and a bandeau and have molded tresses.  They may also be younger sisters, as their figures have been considerably slimmed down, perhaps reflecting the shift throughout the 1910s to a more slender silhouette with less emphasis on the bust and hips.  Although the pose is similar to that of the preceding pair, there are some slight changes.  The shorter dancer now holds a white molded object (perhaps her dance card?) in the hand behind her back and her taller partner's lower right arm and hand are molded to the other's back.    The pedestal has been exchanged for a base molded to resemble a parquet floor.  The base is  incised “Germany” and “8918.” 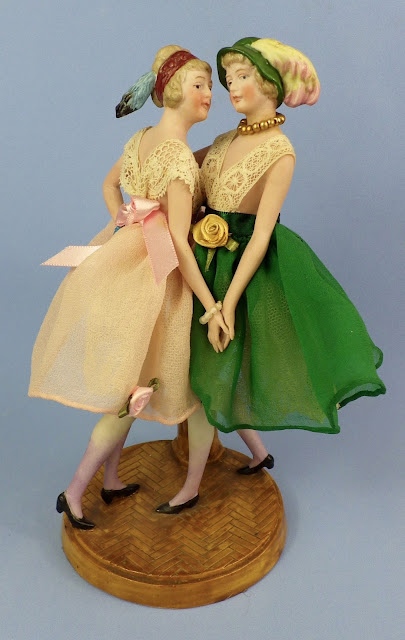 This picture not only shows how the legs have been elongated and the curves carved down, but also why these cavorting cuties needed to be dressed.  The lavender tinting representing their stockings only climbs half way up their calves, and the bisque was left white from the tops of the stockings to the waist.  Yet, dressing is difficult because of the pose and the fact that the supporting pedestal is molded to their hips.  Although far from a competent seamstress, I solved the problem by stitching together pieces of green and pink silk and gathering the strip around both their waists to create the illusion of separate skirts.  I would love to see a pair in their original outfits, as not only am I curious how Galluba addressed the dressing dilemma, but also because undoubtedly they would be dressed with the fine fabrics and detailed tailoring Galluba lavished on its fashion ladies. 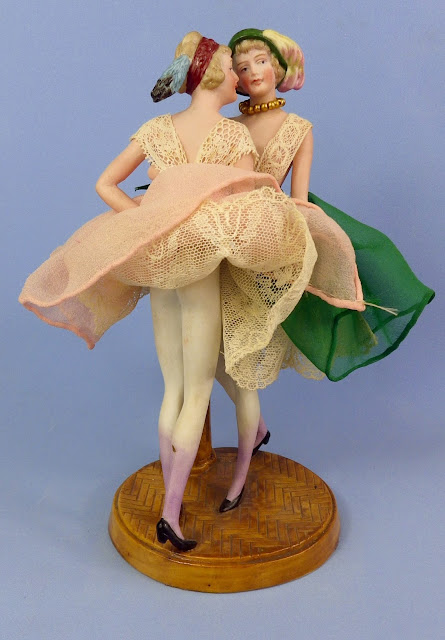