Another Tiny Treasure from William Goebel

This china cutie in a canoe is another diminutive bathing belle by William Goebel, the shallow boat-shaped bowl suitable for holding rings or small trinkets.  Goebel created a series of these Lilliputian lasses, either adorning utilitarian trinket dishes or pincushion tops or simply as itty-bitty bathing beauties. The miniature maiden is a mere 1.5 inches tall and the dish is 4.5 inches long. 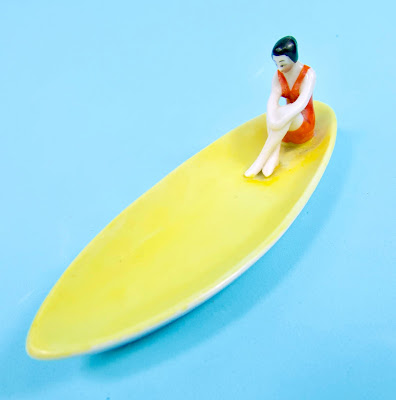 Goebel may have liked small bathers, but it was big on markings. Underneath the dish carries the Goebel crowned "G" and "W," both incised and in blue.  It is further incised "RF 666" (this dainty dish, posted previously on this blog, also has a 600 number) and "Dep," as well as being stamped in black "Germany." There is also a red freehand "W."

Update to My Maneki Neko Page

Learn about the function served by this miniature maneki neko. 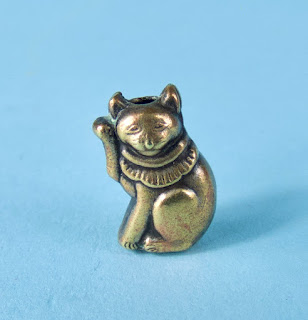 Perched on the edge of a black and white checkerboard dish for rings or trinkets, this tiny china bathing belle is by William Goebel. Goebel used the mold for this little gal to create a variety of goods, as she  has been featured on this blog before, both as a pincushion  and as a stand- (or I guess in this case, -sit) alone figurine. The entire piece is only 2.75 inches wide. 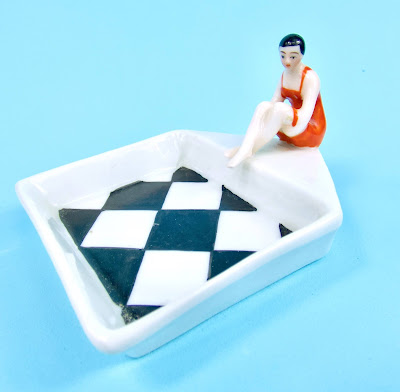 There is no doubt regarding the maker, as the underside is amply marked. There is Goebel's crowned intertwined "G" and "W" mark, both incised and stamped in blue. Other marks include an incised "Dep," "Germany" stamped in black, a black freehand "k," and an incised "RF" followed by a 600 number partially obscured by a paper label for Herpolsheimer Co. (which reveals that this diminutive dish sold originally for 75 cents). In 1870, William G. Herpolsheimer and C.G.A. Voight opened a small dry goods store in Grand Rapids, Michigan. By 1901, the store operated under the name of the Herpolsheimer Company, eventually developing into a large department store with branches in Michigan and Wyoming. The downtown store in Grand Rapids was remodeled in 1949 and hailed for its modern design, which featured a three-story display window over the main entrance. It was a landmark in the city for decades, but in 1986, over the protests of preservationists, it was gutted and altered to create a shopping mall. In the 1990s, the company was acquired by the Lazarus store chain. 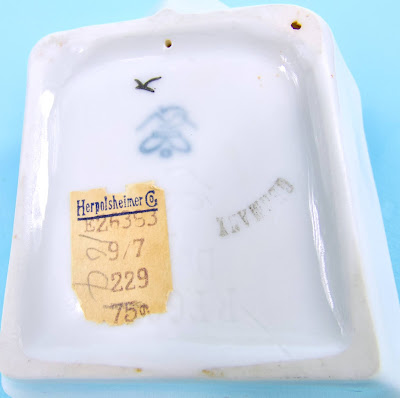