These colorful beach belles in their vivid bathing suits are part of an album printed by William S. Kimball and Company, who, in the 1880s, was one of the largest cigarette makers in the world. The invention of machinery to roll and cut cigarettes made cigarettes cheap and plentiful. To expand their market and outcompete their rivals, tobacco companies had to come up with innovative ways to make their products stand out. Originally cigarette packs came with a card or "stiffener" to prevent the cigarettes from being bent or crushed. Beginning in the 1880s, tobacco companies began printing these cards with colorful images. Many of those early images were made to appeal to a largely male clientele, such as sports, military themes, and of course, pretty ladies, such as stage actresses and bathing beauties. 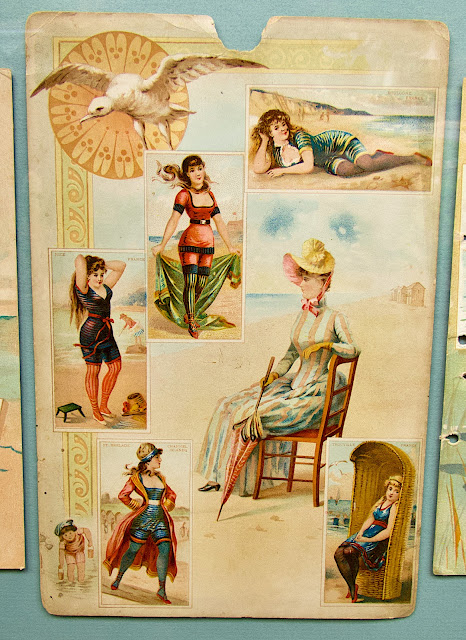 The cards were issued in a series, motivating customers, the tobacco companies hoped, to collect them all (each card included on the back a helpful list of all the other cards in that series). This series entitled "Fancy Bathers," was issued in 1889. There were 50 cards in the series, encouraging a lot of purchasing and puffing in order to procure the full passel of pulchritudinous ladies. 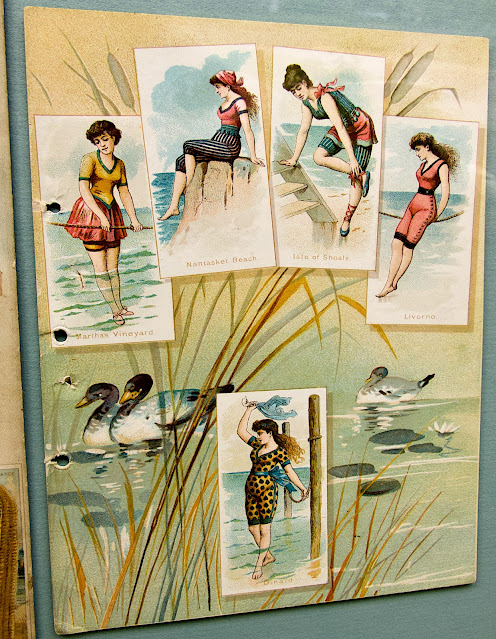 Of course, one needed a place to keep this collection of curvaceous cuties and Kimball obliged by providing a colorful album. These are three pages from the album Kimball issued for its "Fancy Bathers" bevy of cardboard beauties. Each page contains trompe l'oeil images of several of the cards, set against appropriate aquatic backgrounds. As a card was acquired, it could be pasted atop its simulacrum. It is questionable whether such bold and brief bathing attire was ever worn to the beach. I suspect these tobacco cards were the "Sports Illustrated Swimsuit Issue" of their day, featuring scandalous scanty swim attire far more likely to appear in print and the male imagination than at the seaside. 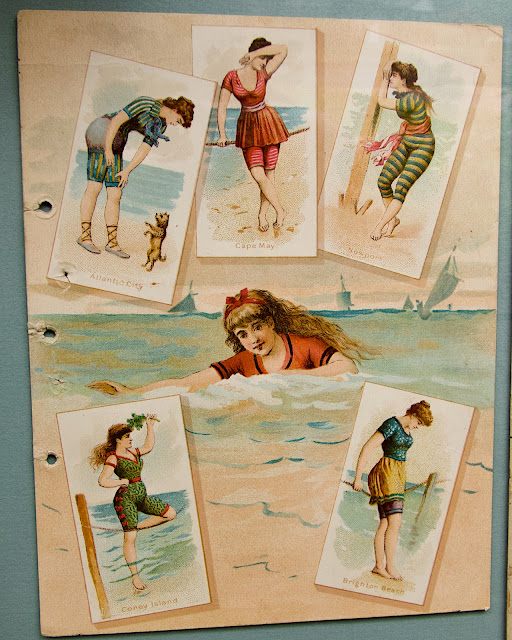 Her
This swan-diving sea siren is a vintage brass and enamel pin. It closes with an early version of the modern round safety catch, introduced in 1930. This would coincide with the style of her swimwear; the belt and longer legs extending past the top of the thigh are typical of 1930s bathing suits. This brass bathing beauty's sleek curves echo the Streamline Moderne style that emerged from Art Deco design in the 1930s, with its emphasis on clean curving aerodynamic lines that symbolized modernity and progress. 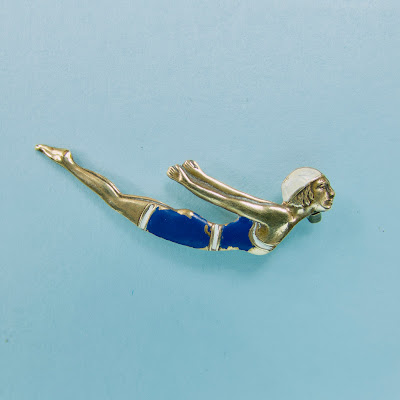