This pretty pair of precolored bisque swimmers is unusual, not because of their pose, but because they are nearly pristine, with both their cold painted features and colorful cloth bathing suits intact.    Their fetching and fashionable swimwear is patterned with bold art deco designs, beribboned with bright little bows.  Just 2.75 inches long, these tiny twins look very much as they did when they left Hertwig and Company nearly a century ago.  Too often these little flappers are now found nude and denuded of their painted features.  These two bathing beauties show how Hertwig made even some of its most common bisque belles eye-catching and alluring. 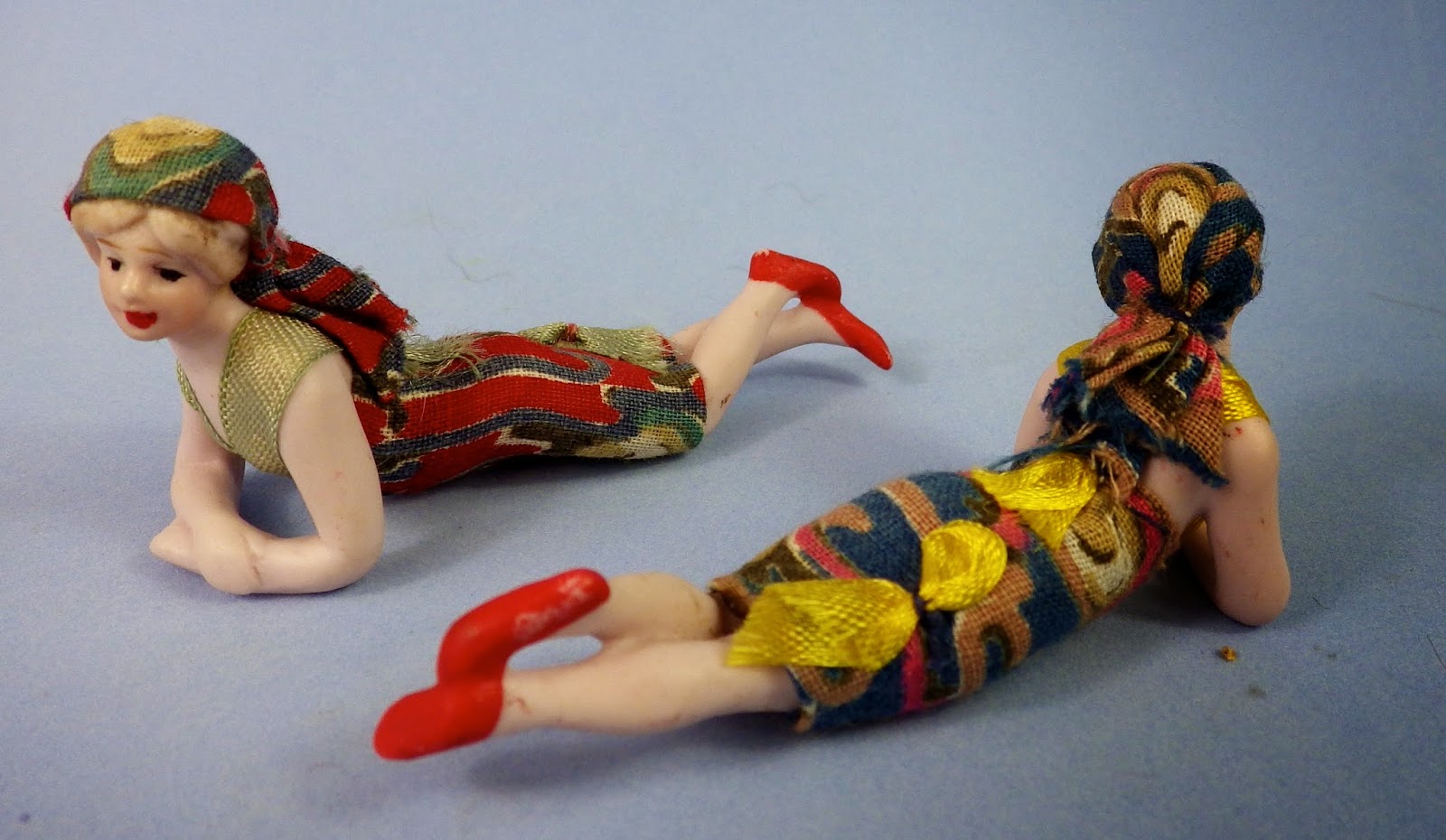 The vast majority of all-bisque dolls are children, so this early all-bisque lady is very unusual, especially as she was modeled with molded underwear (but still manages to look very prim and proper).  Although her combination underwear resembles that worn by the fashion ladies by Galluba and Hofmann, she is more Victorian than Edwardian.  Combination underwear was introduced in the 1870s to reduce bulk under the fitted jackets and narrower upper silhouette of the period.  Combinations were worn through the Edwardian period, becoming frothier and sheerer, often inset with delicate lace and ribbons, and the cuffs climbing closer to the knees as hemlines began to rise.  By the 1920s, the combination was reduced to the flapper's brief "step-in" chemise or teddy.  This combination set, with its short sleeves, modest neckline, and longer legs, would date this demure matron to the late 1800s.  She is of excellent sharp bisque and is delicately painted and beautifully modeled.  Her mohair wig is a replacement and she is 4.75 inches tall. 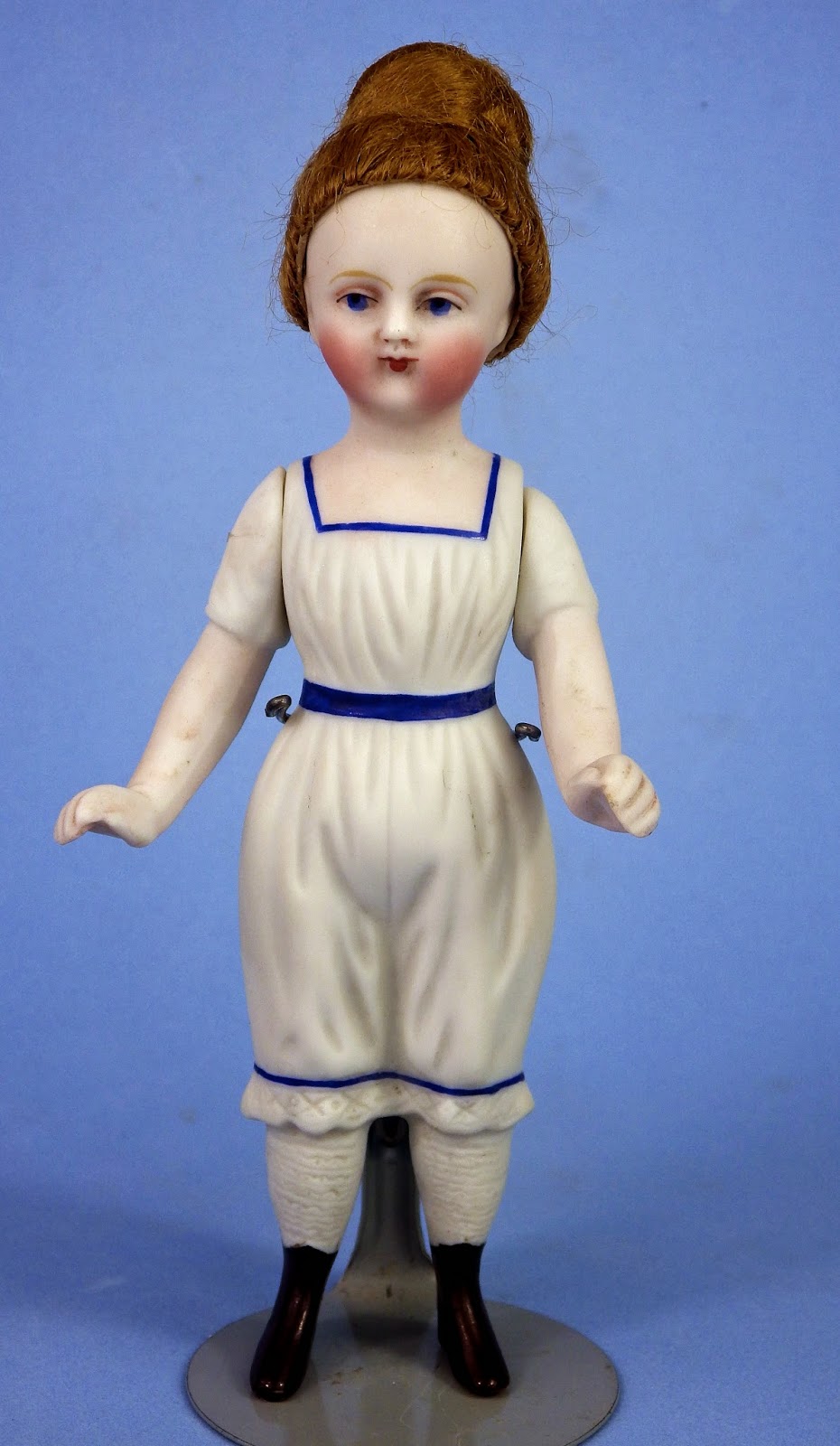 My last post featured a bisque figurine of  a chorus line of the Five Barrison Sisters by Hutschenreuther Porzellanfabrik.  This post is of another line of lovely ladies by Hutschenreuther, the six pretty maidens known as the Florodora Girls. Florodora was a musical that opened in London in 1899, where it became an immediate success.  It was even more successful when it "crossed the pond" and played in New York City, in part because of its famed Florodora Girls.  Called the "English Girls" in the script, the six charming chorines were soon dubbed the Florodora Girls.  This line of lissome lasses is 7.5 inches long and is faintly stamped underneath with the Hutschenreuther mark.
Below is the picture of  the famed Florodoras in the flesh, rather than bisque, that undoubtedly inspired the figurine.  During the long run of the show, over 70 women would be selected as a Florodora, each being a standard 5 feet 4 inches tall and weighing around 130 pounds.  Their appearance with a sextet of handsome young men in the song "Tell Me Pretty Maiden" made the tune a popular hit of the time. 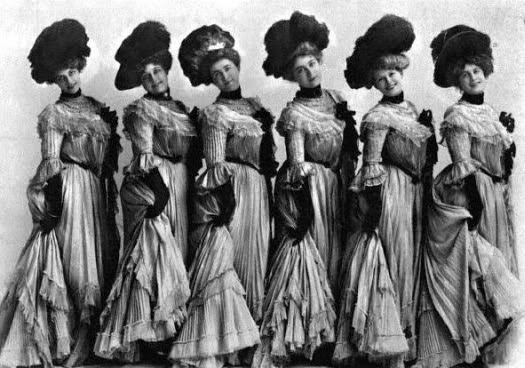 The pretty maidens attracted a swarm of stage door Johnnies.  It is claimed that they all married millionaires, and while it is true that a number of the Florodoras did marry into money, the story  of the most famous Florodora Girl shows that money does not always buy happiness.  Evelyn Nesbit was 14 years old when she was discovered working in Wanamaker's department store in Philadelphia and offered a job as an artist's model.  She became one of the most popular and recognized models in Philadelphia, and later, New York City, posing for such famous artists as Charles Dana Gibson, the creator of the Gibson girl.  In 1901, her beauty won her a place as one of the Florodora Girls and launched her stage career.  It also brought her to the attention of famed architect, and renowned roué, Stanford White.  The 47-year-old White assumed the role of Nesbit's "protector," moving her, her widowed mother, and younger brother into an opulent hotel suite he decorated himself and arranging for her brother to attend a prestigious military school.  In truth, White's interest in the young teenage Nesbit was more predatory than protective, and one evening, after being plied with champagne, Nesbit lost consciousness, only to wake up naked in White's bed.  However, White continued to play Nesbit's benefactor, introducing her to many in New York high society. 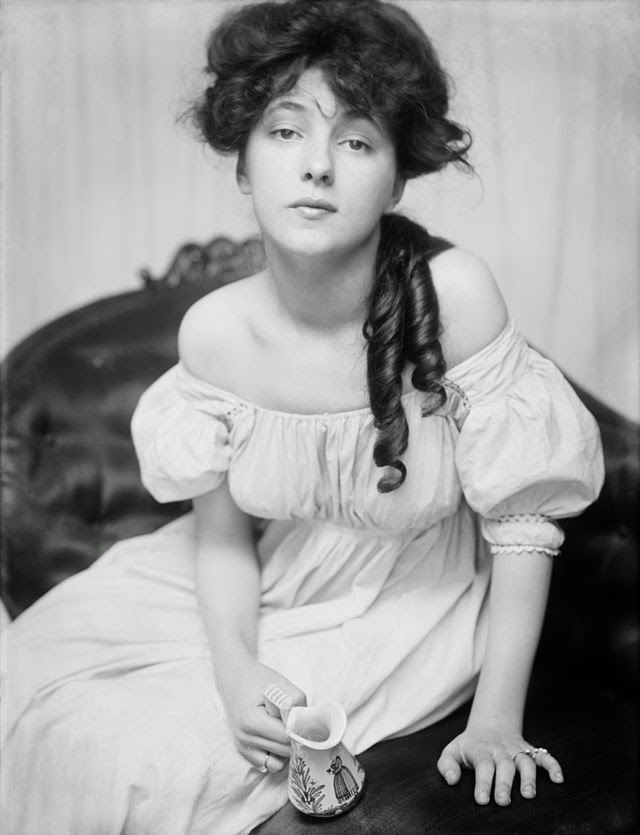 Nesbit's beauty attracted other admirers, including Harry Kendall Thaw, heir to a $40 million coal and railroad fortune.  Thaw was mentally unstable and had a history of brutality and sexual sadism, but he was also very rich, and after being ardently pursued for four years by Thaw, Nesbit, who was always worried about falling back into poverty, married him in 1905.  Thaw made Nesbit repeatedly tell him about White's treatment of her.  Although a frequent patron of brothels and prostitutes, Thaw had a fixation on female virginity and became obsessed with redressing his wife's honor.  On June 25, 1906, Thaw shot and killed White while both men were attending the theater.  After two trials, during which Nesbit had to testify in sordid detail regarding her relationship with White, Thaw was declared not guilty by reason of insanity and sent to an asylum.  Thanks to his family's wealth and influence, Thaw was found sane and released in 1915, but the next year, after he was arrested for sexually assaulting and brutally beating a 19-year-old man, Thaw was again found to be insane and committed, though he would eventually be released.  Nesbit divorced Thaw in 1915 and continued to have a modest career in vaudeville and movies, but her fame as the "fatal beauty" would follow her through her life.