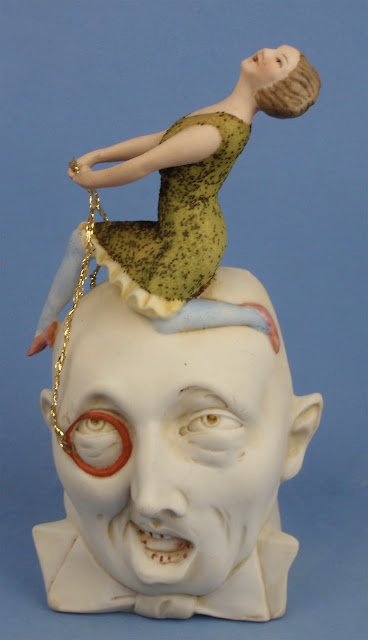 This bizarre vase is part of a series by Hertwig and Company of Germany.  This particular peculiar piece was entitled "Der Gutmutige" (the good natured).  Atop the bald pate of a monocled man  perches a young woman in a short glittery dress.  There is a hole on one edge of the monocle and corresponding holes in the woman's hands, and if a cord is run through the holes, the woman appears to be playfully tugging at the man's monocle (as one friend said, she has "caught his eye").  Judging from the lady's brief and garish outfit, she is perhaps a showgirl of some sort and the man is her good natured and generous sugar daddy.  Of the finest sharp bisque, with excellent modeling and details, there is an opening in the back of the man's skull.  Incised underneath "1273," this piece is 5.5 inches tall. 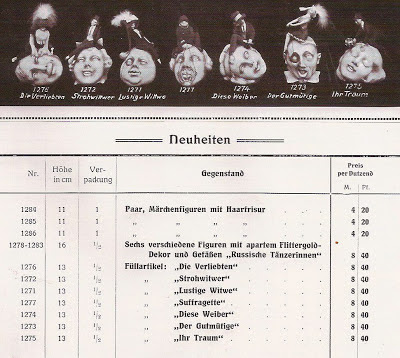 This a copy of a Hertwig catalogue page picturing the entire strange series.  They are from left to right, the "The Lovers," "Grass Widow," "Merry Widow," "Suffragette," "Those Dames," "The Good Natured," and "Their Dream."  Note that the number in the catalogue matches that incised on the bottom of the above vase. 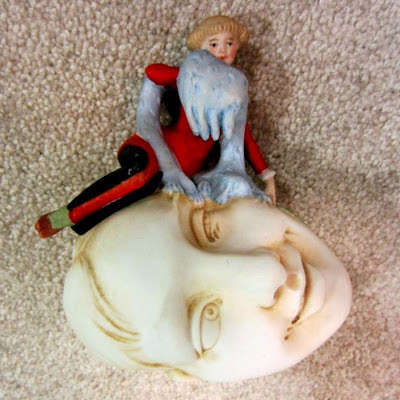 A friend sent me this picture of another of these Hertwig oddities.  This one, according to the catalogue page, is "The Lovers." What at first glance appears to be an out-of-place waterfall is actually the lady's fashionable fur stole and matching muff. 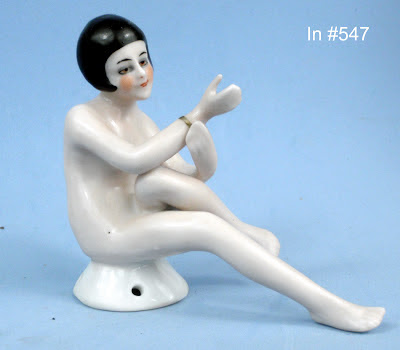 Made to perch on a pretty pincushion or fluffy powder puff, Ms. #547 admires her gold bracelet, while we admire her.  Her amber eyes with their smoky gray shadowing are typical of the finer pincushion figurines and bathing beauties made by the German company of Fasold and Stauch.  Although only 3.5 inches tall, including her base, she is beautifully modeled, with arms and legs free from her body and delicate hands with free thumbs.   Of excellent china, this beguiling bare belle is incised only "6540" on the base.
0 comments 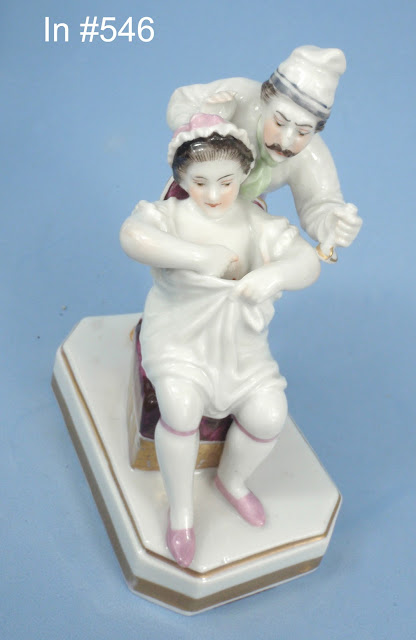 Madame, the flea that crept between your breasts
I envied that there he should take his rest.
The little creature's fortune was so good
That angels feed not on such precious food.

For centuries humans have been fed on by fleas.  Yet these nasty blood-sucking, disease-spreading parasites engendered a genre of early eroticism, the flea hunt.  The image of a nubile young woman intensely searching her naked milk-white skin in the intimacy of her boudoir appeared in everything from fine art to bawdy ballads. 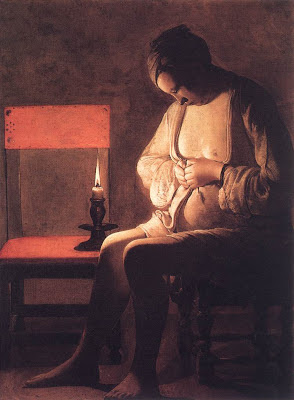 But fleas are tiny, and sometimes the pursuit for the pest requires a posse, so it was not uncommon to also portray a helper, often husband or lover, literally shedding a little light on the hunt. 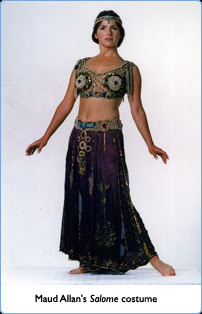 Once conserved, the costume will join other Maud Allan artifacts in DCD's extensive Allan archives, which, according to the article, include a bisque nodder (this example is from my collection). . . . 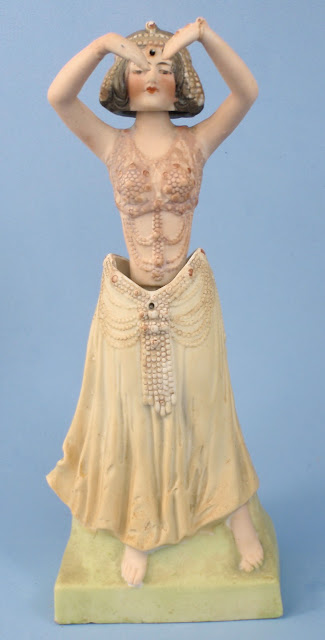 and Salome cigarettes (also from my collection). 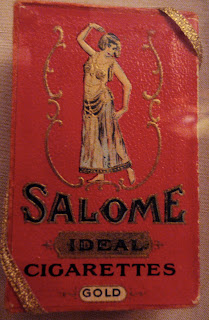 In fact, Ms. Allan, during her brief stardom as the "Salome dancer," inspired all sorts of diverse memorabilia.  The name "Salome" may invoke many visions, but a waltz is probably not one of the first to come to mind (my collection). . . . 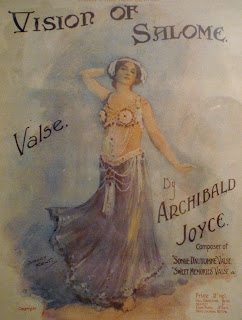 Although born in Canada in 1873, Maud Allan moved with her family to San Francisco, California, while a child.  She became an accomplished pianist and in 1895 traveled to Berlin to continue her music studies, but in 1902 abandoned the piano to become a dancer of "musically impressionistic mood settings."  Allan, who designed her own costumes and created her own choreography, first debuted in the title role in “The Vision of Salome” in 1906, but it was in 1908 when she appeared on the London stage that her Salome achieved stardom. Her two-week engagement stretched into 18 months and she became one of the most famous and wealthy female performers of her time.  After her triumph in England, Allan would tour Europe and the United States, but her fame quickly faded. The fad for interpretative dance was passing as troupes such as the Ballet Russes combined the freedom of interpretative dance with the discipline of ballet, creating a new, polished, and more challenging form of modern dance. In 1918, Allan returned to England to star in Oscar Wilde's "Salome," and became enmeshed in an unsuccessful libel action that ultimately destroyed her reputation and career (for more information regarding the "Black Book" trial, I recommend Philip Hoare's book, Oscar Wilde's Last Stand).
In my book, Bawdy Bisques and Naughty Novelties, I have a chapter devoted to Ms. Allan and the bisque and china Salomes she inspired.
0 comments