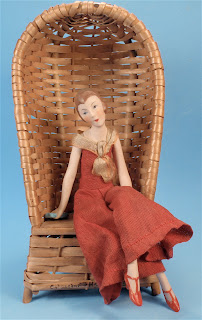 With the summer season is passing, and many of us saying goodbye to sunny days spent on the beach, I thought I would take a look at sea-side resort wear in times past. This lithe long-legged lass wears her original one-piece beach beach pajamas, with wide flared legs and a sleeveless top. In the mid-1920s, pajamas came out of the boudoir to becoming elegant lounge, resort, and even evening wear. Such pajama sets consisted of a top and wide-legged pants, often with a matching jacket. By the 1930s, beach pajamas evolved into a one-piece jumpsuit, usually with a sleeveless or halter top and accessorized with a broad brimmed sun hat. Of fine precolored bisque, this 3.5 inch tall and long bathing belle is loop jointed at her hips and shoulders, and her elongated legs are molded to allow her to cross her legs. Her very slender body is molded in seated position with flat bottom. The 7 inch tall domed wicker beach chair has "Ostseebad Henkenhagen" written in partially obscured ink on the front bottom edge. Henkenhagen was originally a German seaside resort on the Baltic Sea, but it is now part of Poland; renamed Ustronie Morskie in 1945, its sandy beach is still a popular destination. 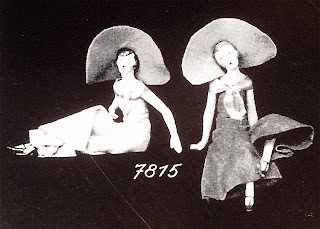 This picture from a 1930s Hertwig and Company catalogue displays the same slender siren, showing she was originally sold with a sun hat. 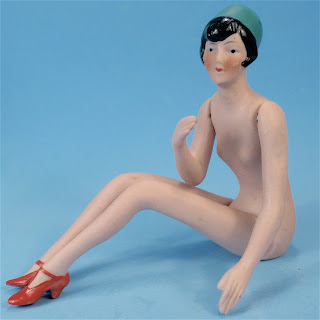 Here is her sister from the catalogue. Her beach pajamas have been lost to time, allowing us to see how she was modeled. In all my years of collecting, I have come across only these two jointed bathing beauties, suggesting that very few were made. And looking at their extremely thin and long arms and legs, many of these ladies were probably broken and discarded over the decades. She is incised "7815" on her lower back, matching the number in the catalogue, and is 3.25 inches tall when seated. 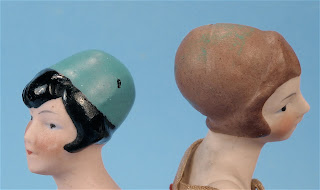 This picture shows the ladies' oddly elongated pates. The ever-thrifty Hertwig found a simple way to create the sunhats, modeling the heads so that the crown of the head did double duty as the crown of each hat. The hat itself was a simple circle of material, with the center cut out to fit over the top of the head. The raven-haired beauty has the top of her head painted green, and her blond companion retains traces of green on hers. 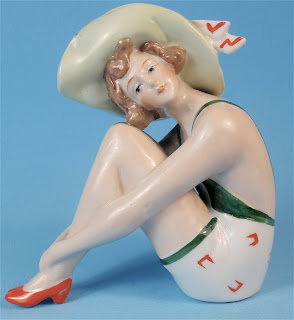 In 1932, American tennis champion Alice Marble caused considerable consternation when she appeared for a tennis match wearing white shorts. By the mid-1930s, shorts were becoming acceptable resort wear for fashionable females, and the one-piece beach pajamas began appearing with truncated legs. This china charmer models such a set. She is 3.5 inches high and is incised "19+34" on bottom, with "Germany" in raised letters.