The Five Barrisons in Bisque 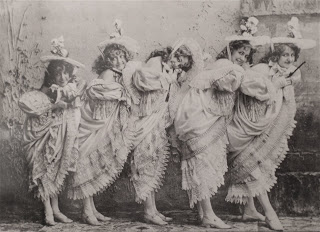 Blonde, buxom, and bawdy, the Five Barrison Sisters once billed themselves as the "wickedest girls in the world." Granted they were performing in the 1890s, when the bar for wickedness was pretty low, but the five sisters (and they were indeed siblings) tantalized and titillated music hall audiences in Europe and the United States with their on-stage naughtiness. Often dressed in girlish costumes, the sisters would warble songs full of double-entendres and sexual suggestiveness. In their most famous act, first performed at the Wintergarten in Berlin in 1896, the sisters, clad in long frilly dresses and babyish bonnets, sang about "Mein Klein Katz" (My Little Cat) as they slowly and slyly lifted up their skirts, exposing ten black stocking-clad legs. At the end of the song, the sisters flipped up their skirts, exposing their "pussies, " as strategically tucked into the crotch of each of their bloomers was a rather bewildered-looking live kitten. This is an early publicity picture, taken while they were touring Europe. 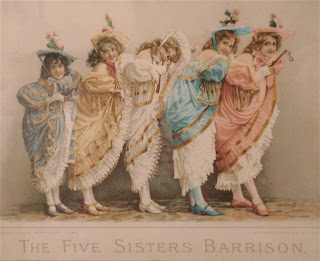 This theater card was obviously influenced by the photograph. Not only did the artist exercise a bit of license in applying the brilliant colors to the sister's skirts, he crowned the last sister in line with raven tresses, even though all five were blonde. On the back of the card is printed "Volks-Theater Nur Noch Bis 30. Juni. 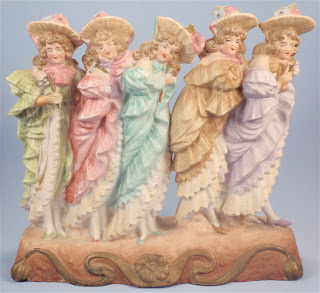 Another copy of the photograph, this time in bisque. German porcelain companies were quick to cash in on any fad, as this piece from H. Hutschenreuther Porzellanfabrik demonstrates, German companies often copied popular prints, photographs, and postcards of the day, and it is doubtful the the sisters earned any royalties from Hutschenreuther's charming creation. This figurine of the five is 6 inches high. It is incised "3064" and is faintly stamped with the company's mark underneath. 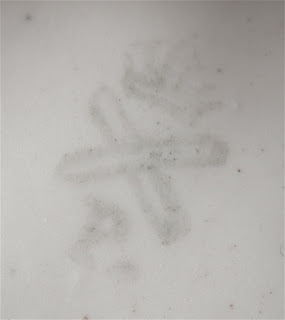 This is a picture of the mark stamped underneath.