Bathing Beauty of the Day; Day 36 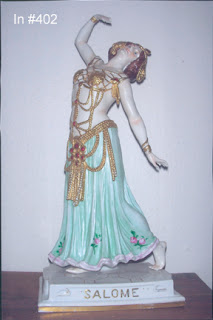 Magnificent Ms. #402  is a towering 14 inches tall.  Of the finest china and workmanship,  she is stamped underneath in blue with the crosshatched “S” of A.W. Fr. Kister and is incised “10417.”  On the base in bold gilt letters is "SALOME.”  Her beautifully detailed costume, what there is of it, is an exact copy of that worn by interpretative dancer Maud Allan  when she performed her most famous role in “A Vision of Salome.” Allan, who designed her own costumes and created her own choreography, first debuted as Salome in 1906, but it was in 1908 when she appeared on the London stage that her Salome took the world by storm.  Her two-week engagement stretched into 18 months and she became one of the most famous and wealthy female performers of her time.  Germany companies such as Kister and Galluba and Hofmann cashed in on Allan's fame by creating Salome figurines copied after a series of postcards Allan posed for.
After her triumph in England, Allan went on to tour Europe and the United States, but already her fame was fading.  The fad for interpretative dance was passing and troupes such as the Ballet Russes were combining the freedom of interpretative dance with the discipline of ballet, creating a new, polished, and more challenging form of modern dance.  In 1918, Allan returned to England to star in Oscar Wilde's "Salome," and became enmeshed in an unsuccessful libel action that ultimately destroyed her reputation and career (for more information regarding the "Black Book" trial, I recommend Philip Hoare's book, Oscar Wilde's Last Stand).