Last week, Ms. #521 was the Bathing Beauty of the Week.  I noted that she was marked in blue with "Germany" and the cross-hatched "S" of A.W. Fr. Kister, but that Porzellanmanufaktur Scheibe-Alsbach, the successor of Kister, still uses the cross-hatched "S" mark, stamped in blue, which could date the piece anywhere from 1905 into the 1990s.   Looking through my reference books, I came across a picture of a page from an early Kister catalogue, and there was Ms. #521 and her playful pup.

This lissome lass clad in a pale green swimsuit, with a matching hat and slippers,  is a sister of the preceding Kister.  Her complexion is matte bisque, while her bathing costume and towel are glazed china.  She is 4 inches tall and 3 inches high. 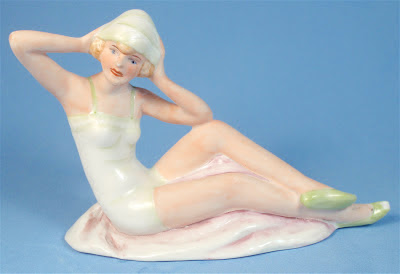 Underneath, she carries the same blue cross-hatched "S" and "Germany," as well as an incised "18." 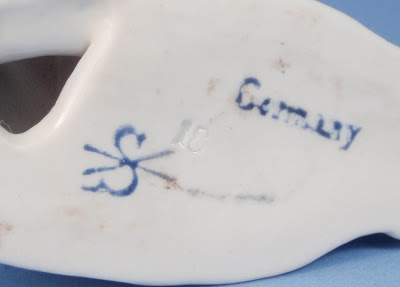 Here the same model appears on the Kister catalogue page.  Note that she was offered with either a towel base or as a free figurine.  Of course, a popular figurine might be produced by a factory for many years. 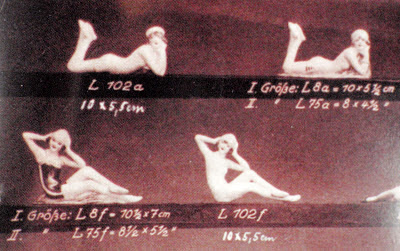 Ms. #532 also appears on the catalogue page.  She is does not carry the blue marks, but is incised underneath "L102," which matches the catalogue number.  She was also offered with either a base or as a free figurine.  This china charmer is 3.5 inches long. 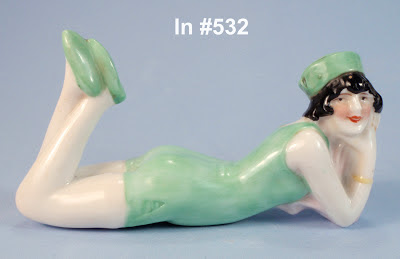