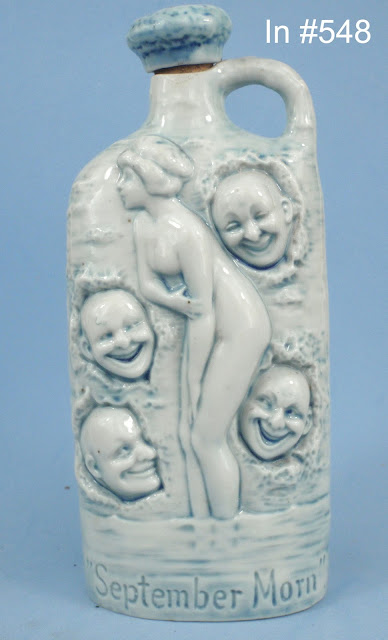 This bawdy bottle features a bare bather surrounded by leering bald men.  Called a "nipper," because it was meant to hold a nip of alcohol,  this naughty novelty was made by the German firm of Schafer and Vater.  It is 6 inches tall and incised "6776" on the back edge.  Under the skinny-dipping siren is the caption "September Morn." 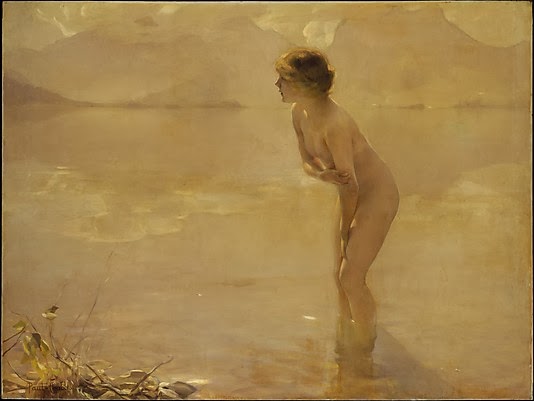 Here is the original "September Morn," now in the collection of the New York Museum of Metropolitan Art.  This rather innocuous nude, painted in 1912 by French artist Paul Chabas, was once one of the best known and most reproduced paintings in the United States.  After it was exhibited  in the Paris Salon, where it won the Medal of Honor, the painting traveled to a gallery in Chicago, where it was displayed in the window of a local art store.  The city charged the store owner with violating a city ordinance barring the display of lewd pictures.  The ensuing trial and acquittal of the owner brought the painting to public attention. Subsequently, the picture journeyed to New York City, where, again on display in a gallery window, Ms. Morn caught the censorious eye of Anthony Comstock, leader of the New York Society for the Suppression of Vice.  Reportedly,  an outraged Comstock charged into the gallery, declaring that there was "too little morn and too much maid!"  After the gallery refused to remove the painting from display, Comstock threatened legal action, but never followed through.  Surrounded by scandal, Ms. Morn became part of popular culture, reproduced on anything from fine art prints to cheap stick pins. 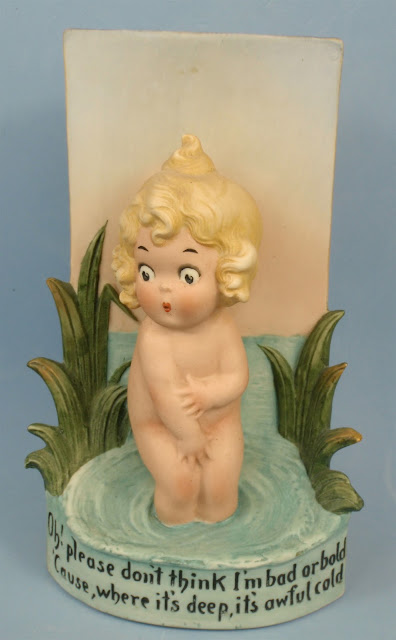 Her popularity soon led to parody.  Here is another version of Ms. Morn from Schafer,  created by Grace Drayton, best known for her pleasingly plump Campbell Soup Kids.  The caption reads "Oh! please don't think I'm bad or bold, Cause where it's deep, it's awful cold!"  Of excellent sharp bisque, this 6.5 inch tall vase is incised with both the Schafer sunburst mark and a facsimile of Ms. Drayton's signature, "G.G. Drayton." 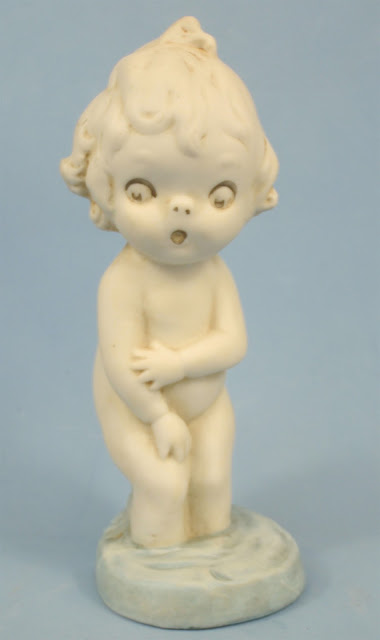 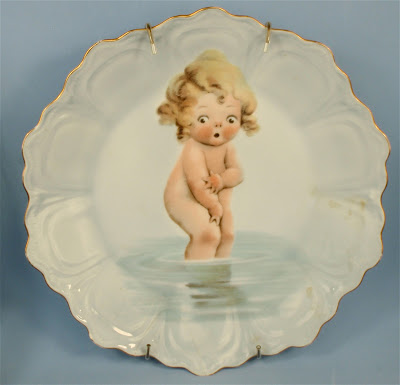 Here  Drayton's pudgy parody appears on a plate.  The back of the plate carries the stamp "Z.S. & Co. Bavaria."

This 13 inch tall composition nude may have been inspired by Ms. Morn.  Although the arms have been reversed, otherwise the pose is the same.  She retains her original mohair wig and probably was given away as a prize at a carnival or boardwalk arcade.