This standing siren by Galluba and Hofmann is 8.25 inches high and incised underneath "424P."   Her pose is very unusual, as Galluba's ladies are typically not shy about exposing their lovely faces and graceful hands.

Her pose seems to echo that of the ancient Greek courtesan Phryne in Jean-Léon Gérôme's 1861 painting, "Phryne before the Areopagus."  In this painting, Gérôme rather luridly recreates the legend regarding the trial of this 4th century BC hetaira.  Phryne was accused of impiety and brought before the Areopagus, which served as the high court in Athens.  She was defended by the orator Hypereides, who removed Phryne's robe before the judges.  Moved by her flawless beauty, the judges declined to condemn to death "a prophetess and priestess of Aphrodite" and acquitted her. 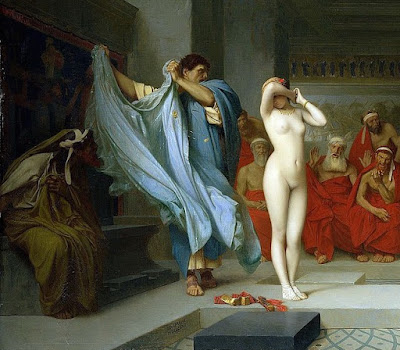 However, this Phryne is a bit of a flirt, and peeks out from behind her arms with smoky, sultry eyes and a touch of an alluring smile on her rosy lips. Such an innocent, but inviting, glance would certainly soften even the harshest judge's heart!  Her mohair wig is a replacement. 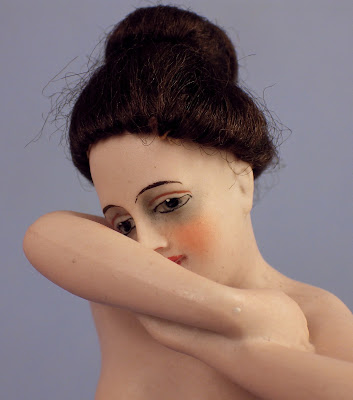