Previously this blog featured Miss Ondine, a mechanical "poupee nageuse" (swimming doll) patented in 1878 by Elie Martin.  That bathing belle has a French fashion head, so she could be dubbed Mademoiselle Ondine.  In that post, I noted that Miss Ondine is most commonly found (not that she is common!) with head by the German firm of Simon and Halbig. Here is the version with the Simon and Halbig head, mold #1079. 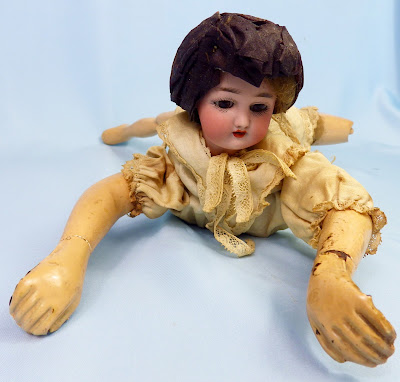 Her body is identical to her French (and probably earlier) swimming sister.  She wears her original silk swimsuit, once blue, but now faded to ecru.  I have seen other models in the same bathing attire, in rose, blue, or white. 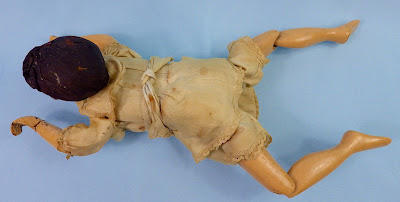 She winds underneath with a key, moving her arms and legs in a rather frantic and frog-like breaststroke.   Her cork body was advertised as waterproof and capable of floating in water. 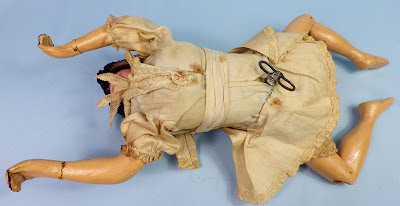 Here Mademoiselle Ondine demonstrates her swimming skills.  I have her balanced on a globular glass candleholder, allowing her key to turn freely.