This whimsical ink and watercolor illustration portrays two anthropomorphised pussycats in Edwardian bathing suits, a female feline serenely seated in a beach wicker chair, oblivious to an enthusiastic peeking tomcat who looks prepared to pounce!  The scene closely resembles this bisque beach belle and her beau  featured earlier on this blog.  This theme of a voluptuous bathing beauty in form-fitting beachwear seated in a hooded wicker chair while a male admirer peers around a corner was a popular image for postcards and other assorted souvenirs in the early 1900s.  The chair's high hood protected the sitter from the wind and sun, but apparently not males on the make. 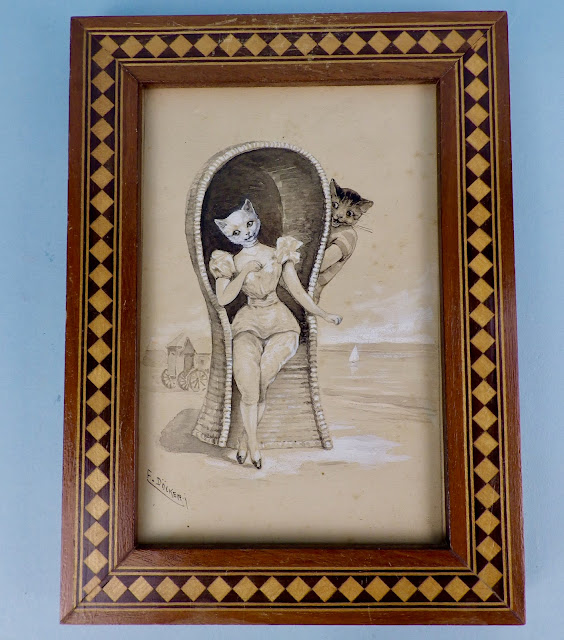 The piece is signed E. Döcker, Jr.  I have not been able to find out much about the artist other than he was a prolific illustrator of postcards in Austria in the early 1900s.  Most of his work consists sentimental scenes of country folk in traditional clothing, but he could paint in a wide variety of genres, including a stunning series of art nouveau nymphs.   Perhaps this pussycat pair were intended for a comic postcard to be sold at one of region's resorts or spas. 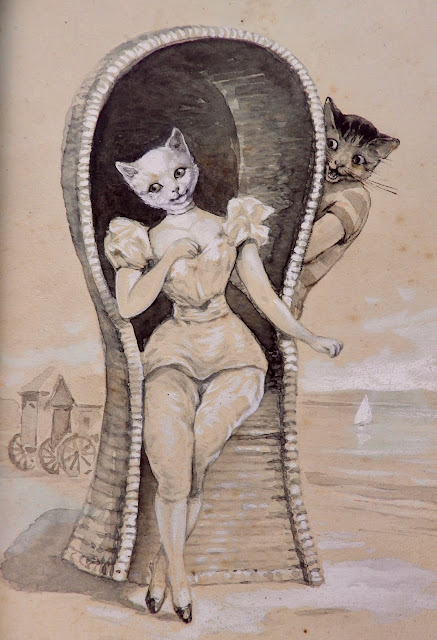 Döcker certainly was a skilled illustrator and seems to have had a sense of humor as well.  He manages to portray some very human emotions in the expressions of these comic kitties. 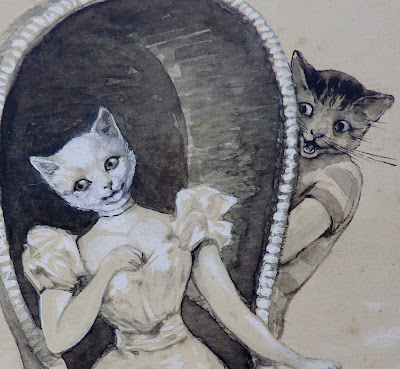 He was able to capture the essence of ordinary cats as well.  In my research I came across several examples of postcards with the following illustration by Döcker.  This puss has conquered a Krampus and is standing proudly with its trophy.  Krampus is the traditional "bad cop" to Saint Nicholas in Austria and other parts of Europe, a black hairy horned figure with a long lolling tongue and draped in rattling chains.  While Saint Nickolas carries a bag of toys and treats for good children, Krampus wields a bundle of birches for whipping the naughty ones and the basket on his back is for carrying off especially disobedient boys and girls.  I guess there must be something about bad boys, because Krampus became in his own way a perversely beloved character.  He was portrayed, often comically, on holiday postcards and Krampus dolls, decorations, and even candy containers could be found among jollier Christmas adornments. 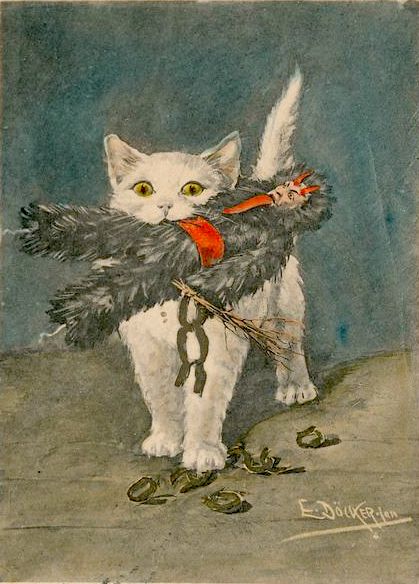