Halloween means dressing up in costumes, or in the case of this little treat, dressing down in a barely-there exotic ensemble of molded beads and jewels.  Although mainly decorated in soft creams and browns to resemble an ivory carving, her exotic attire is emphasized with gilt and accents of red and blue. By the German firm of Galluba and Hofmann, she is 5.75 inches long and incised underneath "9748."  This 9000 series was used by Galluba on many of its luscious harem ladies in exiguous beaded attire.  A similar sultana from this series appeared earlier on this blog. 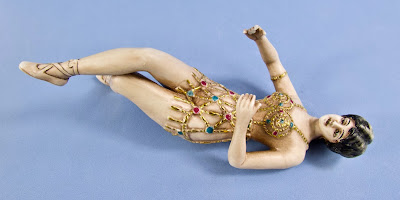 A close up of her face shows the typical Galluba features, such as eyes with intaglio pupils highlighted with a dot of white and softly smiling slightly parted lips, but done entirely in shades of brown. 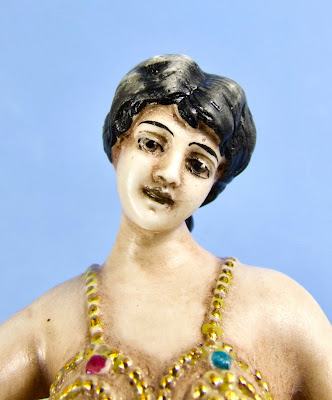