My article, "A Whistle and a Shimmy; Clockwork Carnival Dolls of the 1920s" is in the December 2016 issue of "Antique Doll Collector." The article looks at the clockwork cuties companies like Zaiden Toy Works created for carnival concessionaires. Below are some of the dolls included in my article.  This is "Bimbo," advertised by Zaiden in 1922 as a “wonderful creation” who “executes the belly roll.”

Another Zaiden maiden is "Salvation Nell," a “Salvation Army girl shaking her tambourine and collecting funds. A Goddess of Mercy.”

Although Zaiden did make a Hula dancer, this doll is “Hula-Hula,” a big-eyed Kewpie-doll type by Progressive Toy Company.

This March 8, 1922, advertisement by Zaiden features seven dolls, which it declares are only part of the company’s “Sixteen new mechanical numbers.” How many more of these shimmying and shaking dancing dolls are still out there after over 80 years, waiting to be discovered? 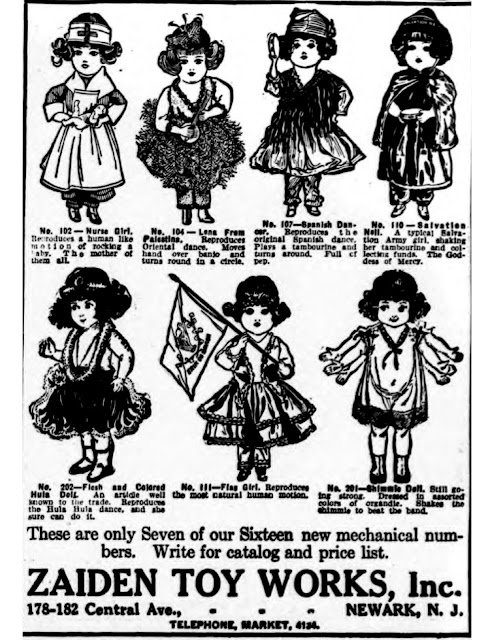