In olden days, a glimpse of stocking
Was looked on as something shocking.
But now, God knows,
Anything goes.

In the days of long skirts and multiple petticoats, the image of a shapely female leg with a well-turned ankle often appeared in naughty novelties, such as these lovely lower limbs. 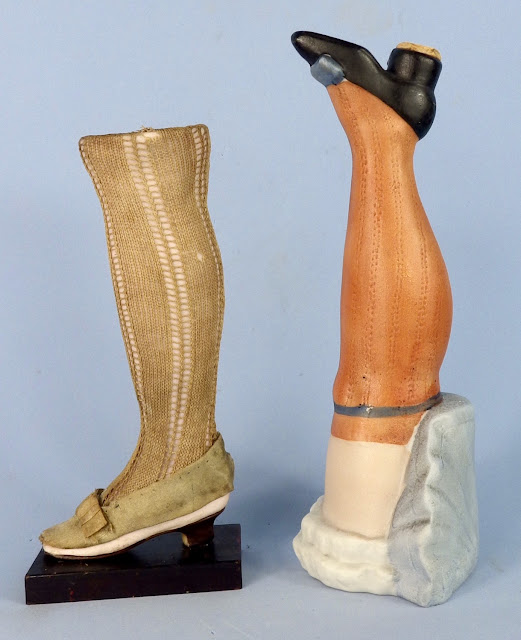 This risqué bisque is a naughty nipper, a novelty bottle that once held a "nip" of alcohol and was often given away by saloons, liquor stores, or at carnivals as gifts or prizes.  The German company Schafer and Vater is know for its comic or bawdy bottles.  Although marked only with a blurred digit, this 6.5 inch tall bottle resembles many of this company's products, especially its underdressed lasses showing off the their lithe legs in molded stockings.

This 5.75 inch tall leg is a bit of a mystery.  Of bisque, it is hollow and open at the top, as well as at the heel, so it could not have served as a bottle.  It is also clad in a stocking of real fabric and the shoe is covered in silk, further suggesting that this limb was not meant to hold liquid.  It cannot stand by itself, so I added the base, with a rod that fits up into the molded hole in the heel.  Perhaps it was meant to be a comic candy container and once had a bag of small sweet treats.  Or, with a base,  maybe it was a counter display to show off a brand of stocking? 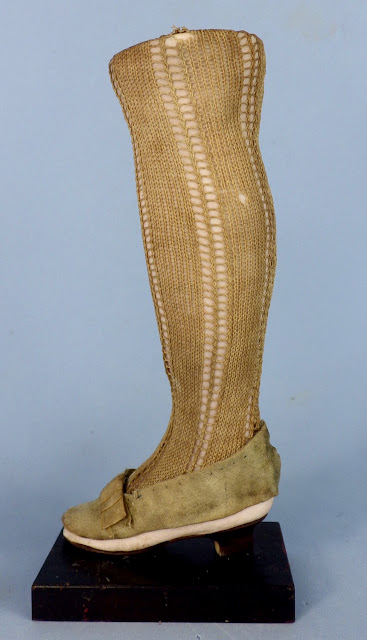