The Five Barrison Sisters, Minus One

Naughty, bawdy, blonde, and voluptuous, the Five Barrison Sisters tantalized and shocked audiences in the 1890s with a vaudeville act specializing in naughty antics and double entendres, often while dressed in girlish frilly dresses and beflowered bonnets.  This coquettish quartet certainly was inspired by the Barrisons during their brief heyday.  Note the pretty pair in the center of the picture both hold a cigarette or small cigar.

This German cabinet card from 1895 shows the sisters in identical costumes.  All of the Barrisons are posed puffing on or holding a cigarette, a scandalous and suggestive accessory for a woman of that era. 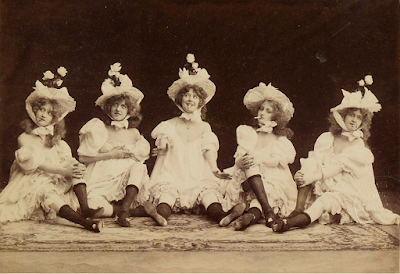 The same picture as interpreted by artist Alfred Choubrac in publicity poster from the famed Parisian Folies Bergère. 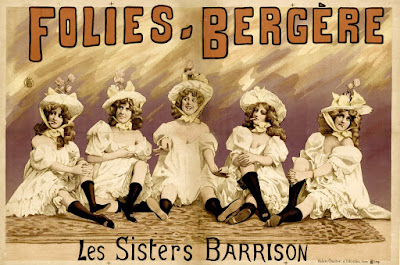 The belle in blue resting on her belly has appeared earlier on this blog. All four of the figurines are of good china and decorated in deep blue, highlighted with dashes of gilt.  I wonder if these provocative poses were from the unknown manufacturer's imagination or taken from publicity pictures of the Barrison bevy.  I also wonder if there is a fifth figurine representing the final sister.  Flaunting her cigar or cigarette, this insouciant sister is 5 inches long.  Like her other siblings, she is unmarked. 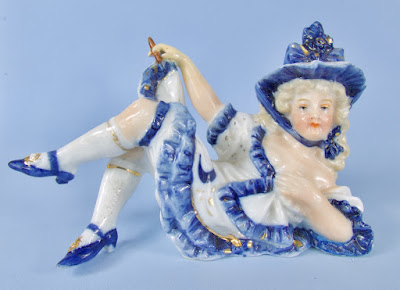 In a pose that could be interpreted as either artless or audacious, this seated sister is 3.5 inches high. 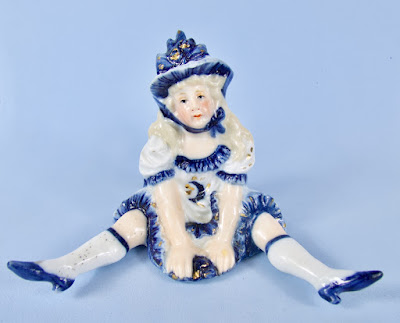 Arms and legs crossed, this Barrison in blue is also 3.5 inches high. 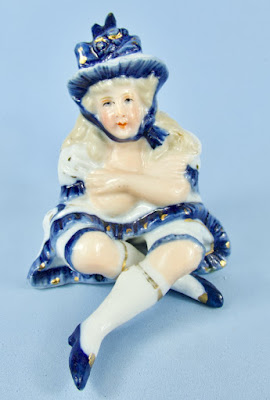 This picture of four femmes flaunting lorgnettes has been posted previously on this blog.  Although I identified the four as part of the Barrison brood, I had wondered where the fifth sister had wandered off to.  Now I think the mystery has been solved. . . . 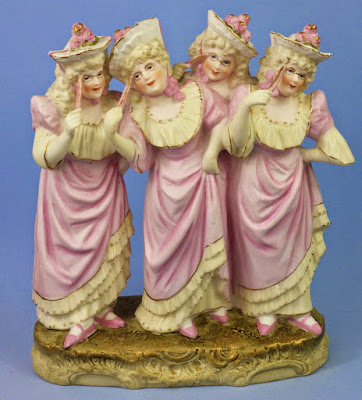 This publicity still features all five of the sisters posing with lorgnettes, their costumes identical to the ones worn by their bisque doppelgängers.  While clearly copying this photograph, the unknown manufacturer simplified the figurine and made it more compact by not only eliminating the sister on the far left, but also switching the two center sisters in the remaining quartet and moving them all closer together. 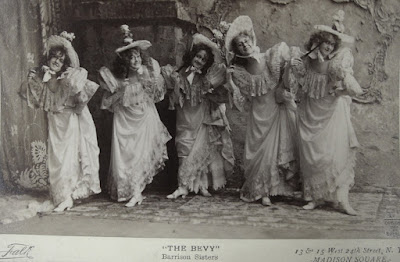