According to the label on the bottom of this celluloid cutie's cardboard base, she "Passed TCTMA Inspection." Certainly this beauteous bathing belle could easily pass any inspection!  She is 9.5 inches tall and unmarked except for the aforementioned label.

But what is the TCTMA? My Internet research lead me to the website of Celluloid Library Memorial House in Yokohama, Japan. There I learned that Japan had been a major producer of celluloid. A mixture of nitrocellulose and camphor, celluloid was patented in the United States in 1869. Lightweight and easily molded, it was used in a wide variety of products, including dolls and toys. The forests of Taiwan (then Formosa) were a major source of camphor and the island was under Japanese control from 1895 through the end of WWII. Japan quickly moved from exporting camphor to manufacturing celluloid itself and soon claimed a significant portion of the international market. However, celluloid is extremely flammable. On December 16, 1932, a fire at the Shirokiya Department Store in Tokyo killed 14 people and injured 67; the fire began when a spark from a light bulb adorning a Christmas tree ignited a nearby display of celluloid toys, resulting a flames that burned four of the store's eight stories. In 1954, the United States banned imports of Japanese celluloid toys for safety reasons and the creation of flame-retardant plastics eliminated much of the demand for celluloid, although it continued to be used in some products, such as ping pong balls and and fountain pens. In 1995, the last Japanese celluloid factory moved its production to China, ending the history of celluloid manufacturing in Japan.
Now back to TCTMA. Unable to find anything about this organization on the Celluloid House website, I emailed them and promptly received a very informative reply from its director, Mr. Isoa Iwai. He explained that the initials stand for "Tokyo Custom Tokai Marine Authorized," meaning that the bathing beauty had passed inspection both by customs and the Tokai Marine Insurance Company (founded in 1879, it was the first Japanese-based insurance company). Mr. Iwai also said that these types of dolls were produced in the 1920 to 1930 period. 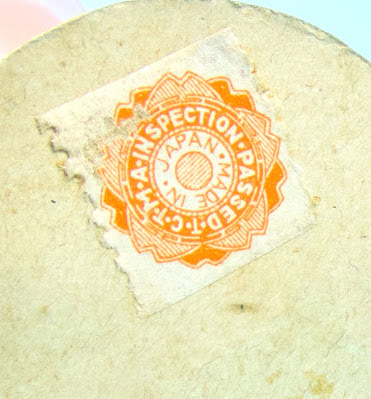 This lissom lass is beautifully modeled and painted. Her coloring appears as bright as the day it left the factory and her alluring expression and large blue eyes are exceptionally attractive. 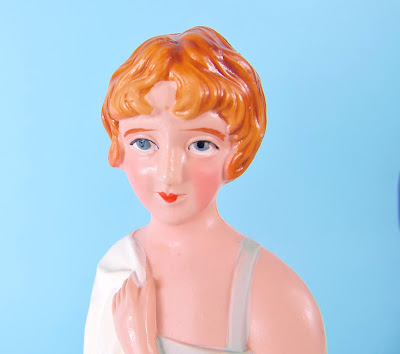 She came in her original box, which no doubt helped preserve her in such pristine condition over the last century. 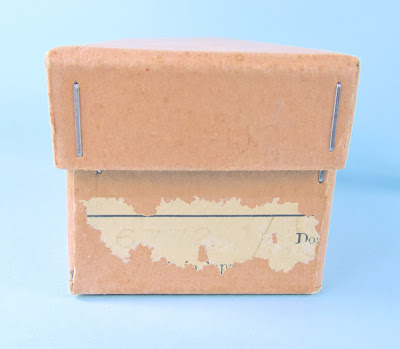