Bundled up in a beach blanket and bonnet, this lovely laughing bathing belle seems a bit covered up for a day of sand and sun. . . . 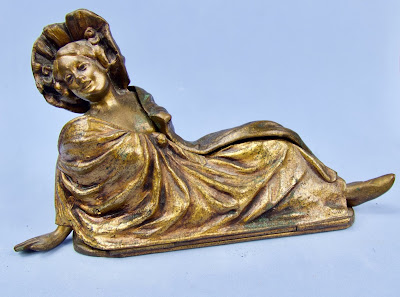 However, her hinged towel opens to reveal her very brief bathing suit and bare bosom.  Of gilded spelter, this naughty novelty is 5.5 inches long and 3 inches high. 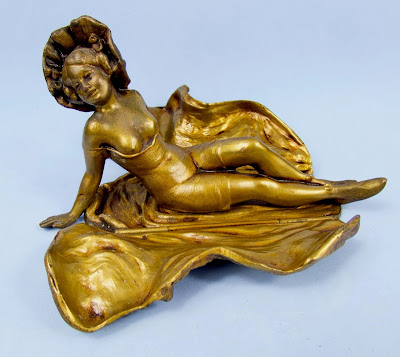 Underneath she is marked "JB 2039." “JB” stands for Jennings Brothers Manufacturing Company, founded in 1890 in Bridgeport, Connecticut. The company designed and created metal decorative objects, such as bookends, clocks, candelabras, and boxes. It went out of business in the 1950s and the original molds and casts were sold. I have noticed over the past few decades that this same piece is showing up rather frequently cast in bronze and attributed to the Viennese foundry of Franz Xaver Bergmann (or Bergman), which produced fine quality bronze sculptures, patinated or cold-painted, in a wide variety of subjects, from innocent animals to exotic Arabs to erotic scenes. These bronze versions are variously stamped with a blurred Bergmann urn mark or "Namgreb" (some erotic authentic Bergmann pieces were signed "Nam Greb, which is "Bergman," minus an "n," spelled backwards. Typically it is written as a faux signature with two separate words in graceful cursive).  They are rather roughly cast, with flaws in the bronze, and the sharp details seen in the Jennings Brothers belle are lost or blurred, such as the coils in the hair, the folds in the blanket and ribbing on the bathing suit, the delicate sculpting of the face, and the exposed nipples. The cold painting is heavy, garish, and rather sloppy.  I know that a bronze version of this belle is currently being produced by at least European manufacturer, stamped with the Bergmann urn mark; although I have seen similar bronze bathers offered for well over $1,000 on eBay.com, you can buy this one for a mere 169 euros (the gallery also offers a number of other recast Bergmann molds).

Upon the death of Bergmann's son, the company's molds and remaining stock were sold in 1954 to Karl Fuhrmann and Company. Currently, there are high-quality reproductions from Bergmann's molds are being cast in Austria, and there are also poorer quality copies and outright fakes coming out of Europe and Asia.  Bergmann bronzes are highly collectible, especially the naughtier subjects, so unfortunately there is a lot of incentive to peddle recasts and fakes as originals.  Although it is possible Bergmann copied the Jennings Brothers or the Jennings Brothers introduced a less expensive version of a Bergmann bronze, my suspicion, taking into account the large number and lesser quality of the bronze versions, is that they are modern pieces with dubious signatures, not authentic antiques. A close up of the Jennings Brothers bather shows the nice sharp details, missing on the bronze versions. 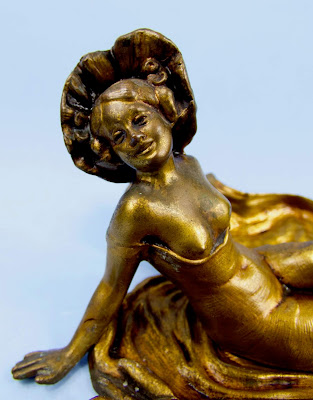